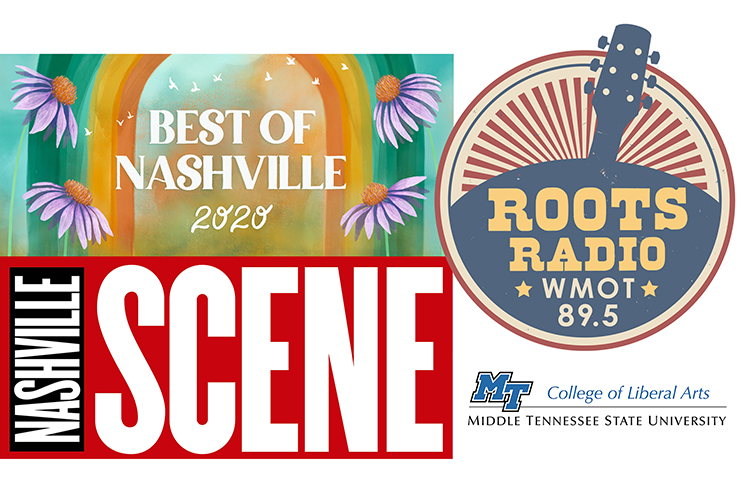 So are MTSU College of Liberal Arts faculty members David Wilkerson and Sisavanh Phouthavong-Houghton, who also earned “Best of Nashville” shout-outs for their creative Nashville projects this year.

Scene writer Ron Wynn, a Grammy-nominated veteran music critic and author, praised WMOT, Middle Tennessee’s only 100,000-watt Americana radio station, for providing important music with a home, saying it “has evolved into something that’s both vital and needed.”

Wynn wrote that WMOT is making a difference by focusing on “contemporary and vintage acoustic music, much of it deemed a commercial liability by the corporate types who rule mainstream radio. The station has proven a home for a wide range of styles and artists who otherwise would get little to no airplay.”

Hubner, Wynn wrote, is great at his 6-10 a.m. weekday shift because he remains “an active, vital part of Nashville’s blues and Americana scene.”

“Thankfully, ‘WMOT Mornings with Whit Hubner’ is more about showcasing selections from every idiomatic area covered by Americana than it is personalities, contests and everything else,” the author added.

The Scene’s arts, music and culture recognition of Department of Theatre and Dance instructor Wilkerson praised his “Best Fight Choreography” in this spring’s Nashville Shakespeare Festival production of “Macbeth.”

Wilkerson is fresh off directing a subtly modernized MTSU Theatre production of “Romeo and Juliet” that also marked the university’s inaugural venture into theater performance livestreaming.

“Phouthavong’s sprawling display of art and sculpture that responded to America’s devastating Vietnam-era bombing campaigns in Laos and Cambodia … spoke to the turbulence of war and refugee life, as well as to the lasting legacies found in the third-culture experiences of Laotian Americans like Phouthavong,” writer Joe Nolan said in his praise, calling the work “powerful.”

Of course, these aren’t the first mentions of MTSU arts, music and culture in the Scene’s “Best of Nashville” writers’ lists.

Among the most recent are alumna Daisha McBride‘s debut full-length release, “WILD,” earning the 2019 Best Hip-Hop Album nod and her 2018 salute as “Best Hip Hop Newcomer”; indie-rock artist and alumna Julien Baker as the “Best Murfreesboro Export” of 2016; and Department of Political Science and International Relations professor Sekou Franklin as 2015’s “Best Liberal” for his ongoing challenges to the status quo in racial and class discrimination and equality.

WMOT, a charter member of National Public Radio and a part of MTSU’s College of Media and Entertainment, celebrated its 50th anniversary in 2019.

It began broadcasting 780 watts of rock from the university’s Dramatic Arts Auditorium to the campus and adjoining neighborhoods in 1969 and joined NPR when it launched in 1970.

The station pioneered an all-jazz format for Middle Tennessee, along with an award-winning news staff, that drew a large and loyal audience for 34 years. WMOT changed to its current Americana format in September 2016 in a partnership with Music City Roots, a Nashville-based firm that provides programming for both radio and television.

Its 100,000 watts, broadcast from MTSU’s Center for Innovation in Media in the Bragg Media and Entertainment Building, barely 2 miles from the geographic center of Tennessee, now reach a potential audience of 1 million across three states, and its website’s international audience at www.wmot.org continues to grow.

He’s been on-air in Nashville for many years, often while maintaining his successful marketing and sales career in other fields. His resume includes stints at Vanderbilt’s WRVU, the famed Radio Free Nashville and, just before he joined WMOT, at WHPY-FM Hippie Radio.

For more information about WMOT, visit www.wmot.org. MTSU’s College of Media and Entertainment website is www.mtsu.edu/media.