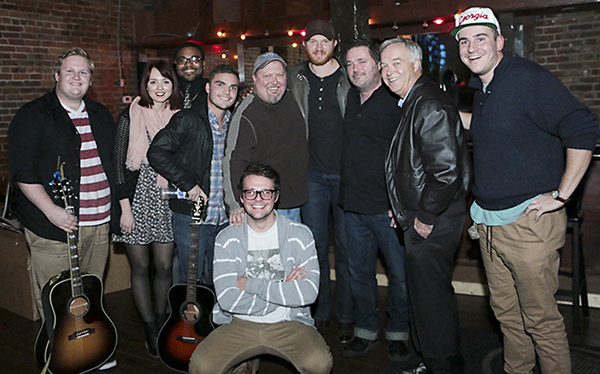 The Dec. 7 event, co-sponsored by ASCAP and Spirit Music Nashville, generated almost $4,000 in ticket sales at the Listening Room Café in downtown Nashville.

Odie Blackmon, a veteran songwriter and the new coordinator of the Department of Recording Industry’s commercial songwriting concentration, expressed his thanks to students, sponsors and supporters for all their help with the show.

“This money will go directly to hire a new adjunct professor for the spring 2015 semester!” he said in an email after the show. “We are already working on another ‘MTSU Songwriting Series’ show for the spring with a major country star, so stay tuned.”

Paslay, a 2005 grad of MTSU’s College of Mass Communication, has made regular appearances on country music airplay charts with this year’s self-titled debut release, which hit No. 4 on Billboard’s country albums listing and includes his top-10 single “Friday Night.”

The music business major’s songs have been winners for other artists too, including Jake Owen’s “Barefoot Blue Jean Night” and Paslay’s Grammy-nominated “Even If It Breaks Your Heart” for the Eli Young Band. Both hit No. 1 on the charts.

Altman, who was nominated for a 2014 Grammy for co-writing Jason Aldean’s No. 1 “Take a Little Ride,” has also written for and with Paslay as well as for Will Hoge and Tim McGraw. Altman’s songs also have been featured on the ABC drama “Nashville.”

Blackmon is himself a Grammy-nominated songwriter for Lee Ann Womack’s “I May Hate Myself in the Morning,” which also won the 2005 Country Music Association Song of the Year. He co-wrote George Strait’s “She’ll Leave You with a Smile” and Gary Allan’s “Nothing On But the Radio,” both of which topped the country charts.

MTSU’s ongoing partnerships with the music industry have continued to expand the Department of Recording Industry into one of the top programs in the nation.

The department was part of an international Top 25 list of acclaimed schools touted by The Hollywood Reporter in mid-November, and Billboard magazine has also touted MTSU’s program as one of the top five in the world.

More than a dozen MTSU alumni or former students and faculty from around the university have been nominated for Grammy Awards in the last four years. Seven have won Grammys, including a couple of repeat recipients, in categories from classical to gospel to bluegrass.