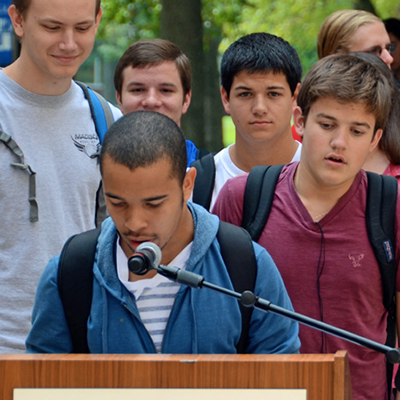 MTSU freshman Hanah Owens was among a few dozen or so volunteers who stood in line Tuesday outside Peck Hall, taking turns at the lectern in reading portions from the Constitution.

“I really value the Constitution and I thought this was a great way to support the Liberal Arts college,” said the 18-year-old English major from the Tri-Cities area. “People hear it walking by and it helps remind you of everything the country stands for.”

MTSU celebrated the 226th anniversary of the signing of the U.S. Constitution on Sept. 17 with a focus on voter registration as well as multiple daylong readings of the document.

The university observes the Constitution’s 1787 signing every year with special events and programs organized by the university chapter of the American Democracy Project.

Beginning at 9 a.m. on campus Tuesday, students, faculty and staff volunteered to read the Constitution in different locations throughout campus, including at Peck Hall.

Dr. Mark Byrnes, dean of the College of Liberal Arts, said he was pleased with the line of students at Peck waiting for their chance to read a snippet from the founding document.

“Anything that improves the knowledge and understanding of the Constitution is a good thing, and that’s what we’re trying to do here today,” Byrnes said.

Voter registration, assisted by the League of Women Voters and Tennessee Citizen Action, also was held on the Peck Hall lawn and the Paul W. Martin Sr. Honors Building lawn.

The American Democracy Project at MTSU website has information specifically for student voter registration, including residency requirements, at http://capone.mtsu.edu/amerdem/campus_vote.shtml.

Also among this year’s special programs was a free public debate by the MTSU Blue Raider Debaters, who discussed the federal DREAM Act undocumented immigrant program.

MTSU freshman Hanah Owens reads from the U.S. Constitution outside Peck Hall as part of the university’s Sept. 17 Constitution Day activities. At right is Connie Huddleston, events coordinator for the College of Liberal Arts, who helped volunteer readers. (MTSU photo by News and Media Relations)

Tyesha Preston, a freshman from Chattanooga majoring in international relations and political science, registers as a first-time voter during the Sept. 17 Constitution Day celebration on the MTSU campus. Along with voter registration sites manned by the American Democracy Project at MTSU, the League of Women Voters and Tennessee Citizen Action, volunteers read the Constitution in its entirety at several locations across campus. (MTSU photo by Darby Campbell)

Dr. Pat Wall, an associate professor of business law at MTSU, dons a Betsy Ross costume to read from her personal copy of the U.S. Constitution during the university’s Sept. 17 Constitution Day celebration. Dr. G. Robert “Smitty” Smith Jr., center right, chair of the Department of Accounting, listens to Wall along with the assembled students, faculty and staff in the courtyard of the Business and Aerospace Building. (MTSU photo by Darby Campbell)

Ken Paulson, dean of MTSU’s College of Mass Communication, reads a portion of the U.S. Constitution in the Quad outside the Bragg Mass Comm Building during the university’s Sept. 17 Constitution Day celebration. (MTSU photo by Darby Campbell)

As a line of participants wait patiently behind him, MTSU freshman Roland Person, a recording industry major from Memphis, reads from the U.S. Constitution Tuesday outside Peck Hall as part of the university’s Constitution Day activities. (MTSU photo by News and Media Relations)