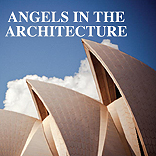 The MTSU Wind Ensemble is now the first and only university musical ensemble in Tennessee to record for the world’s largest classical music label.

“Angels in the Architecture,” a CD by the MTSU Wind Ensemble for the Franklin, Tenn.-based Naxos label’s Wind Band Classics, interprets the works of composer Frank Ticheli and two of his mentors, Pulitzer Prize-winning Leslie Bassett and 2007 Musical America Composer of the Year William Bolcom.

The 55-member ensemble, made up primarily of undergraduate MTSU students, performed Ticheli’s “Symphony No. 2 for Concert Band” and the title track, which was inspired by the Sydney Opera House in Australia, along with Balcom’s “First Symphony for Band” and Bassett’s “Nonet—Two Movements for Winds, Brass and Piano.”

Dr. Reed Thomas, director of bands at MTSU, led the creative project, which followed a rigorous vetting process with a live concert performance by the ensemble and a yearlong international jury review.

“It really puts MTSU on the map to be the only university in Tennessee and one of the few universities ever on the Naxos label,” says Thomas, who also is a professor in the School of Music. “It sheds a very strong light on the high quality of our wind ensemble and our faculty work.”

“MTSU has been recognized by the world’s largest classical label as a center of excellence by recording our ensemble and putting out a commercial recording,” says Dr. George Riordan, director of the MTSU School of Music. “Naxos recognizes that our wind ensemble and School of Music can compete in the global marketplace.”

“We were thrilled to be able to collaborate with Reed Thomas and his fine ensemble at MTSU to produce this great album and homage to the very talent composer, Frank Ticheli,” says Randall Foster, founder of Naxos Wind Band Classics. “This album is yet another indicator of just how much musical talent we have residing in middle Tennessee.”

MTSU’s WMOT-FM (89.5) has been airing tracks from “Angels in the Architecture” as part of its classical music programming and has given copies of the CD to its donors as premiums during fundraising campaigns.

“One of the educational assets of this recording is that many students wanting to find employment will have a leg up,” Thomas adds. “This will be a valuable part of their education.” The band director says that about one-third of the ensemble’s members have graduated since the recording was made.

To order the CD, go to http://bit.ly/MTNaxosCD and click on “Buy and Download” on the right side of the page.