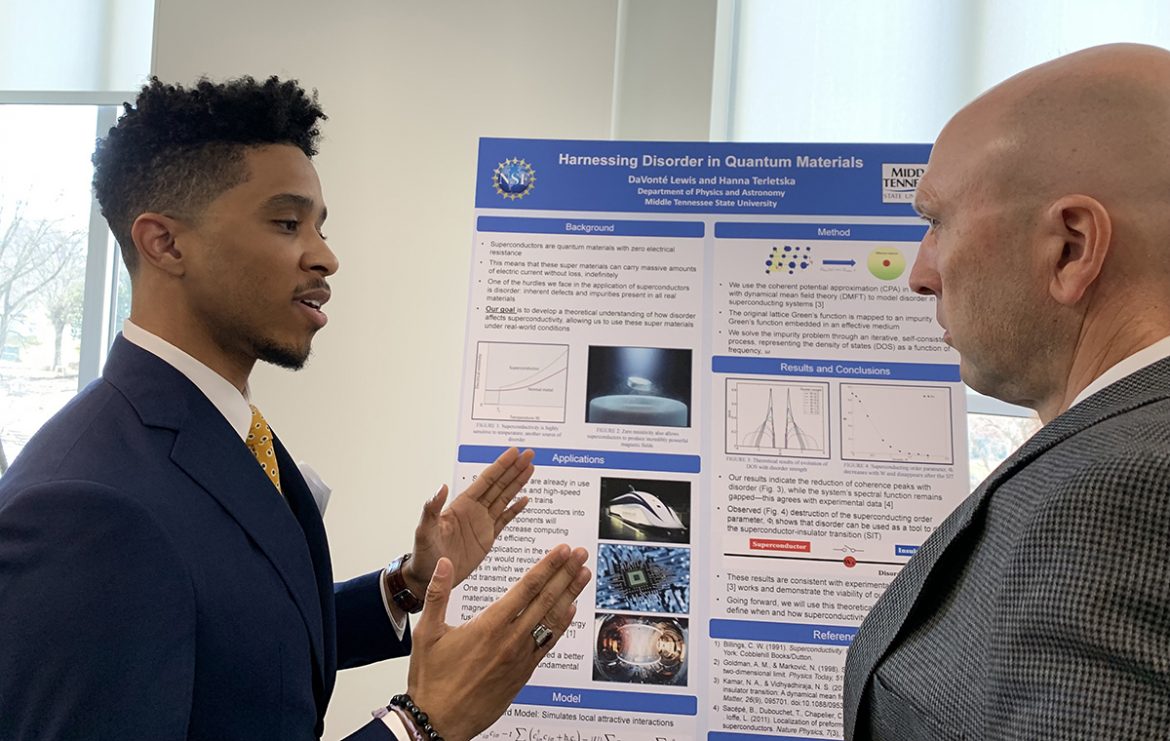 NASHVILLE, Tenn. — Bright futures appear to be on the horizon for MTSU undergraduate researchers.

Chemistry major Sophia Taylor plans to continue in that field and as a researcher in graduate school after graduating from MTSU in May. The Nashville native was among seven university undergrads — and nearly 40 altogether from across Tennessee — selected to attend the annual Posters at the Capitol Wednesday, Feb. 16, showcasing research in the Cordell Hull Building. 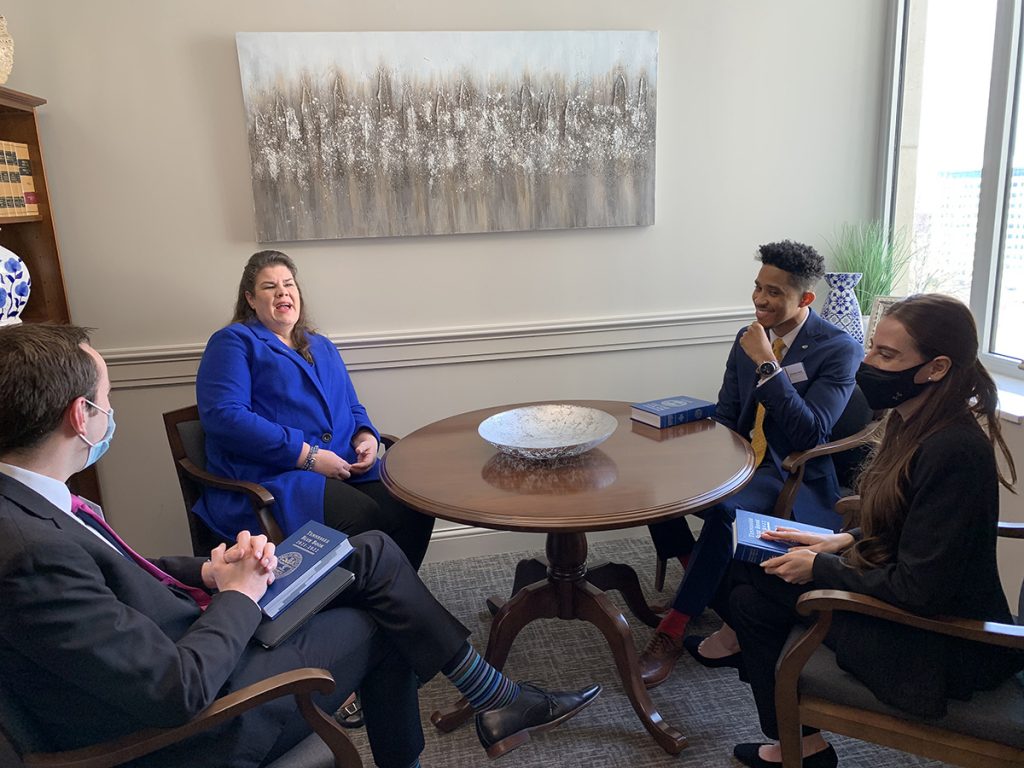 Posters at the Capitol brought together STEM (science, technology, engineering and mathematics) researchers from seven state universities. They visit with state legislators during scheduled meetings and discuss their research with peers, faculty mentors, the legislators and others.

The effort is coordinated by the Tennessee STEM Education Center at MTSU.

Graduate school options for Taylor include Ohio State, Purdue and Washington University St. Louis, and conduct similar research (synthetic organic electrochemistry) to what she has been conducting at MTSU.

“Potentially, I’ll be doing research with batteries and sustainable synthesis research as well, making them (better),” Taylor said. “The future in cars is electric batteries. There’s a lot of research going on with batteries. It’s an important field right now.” 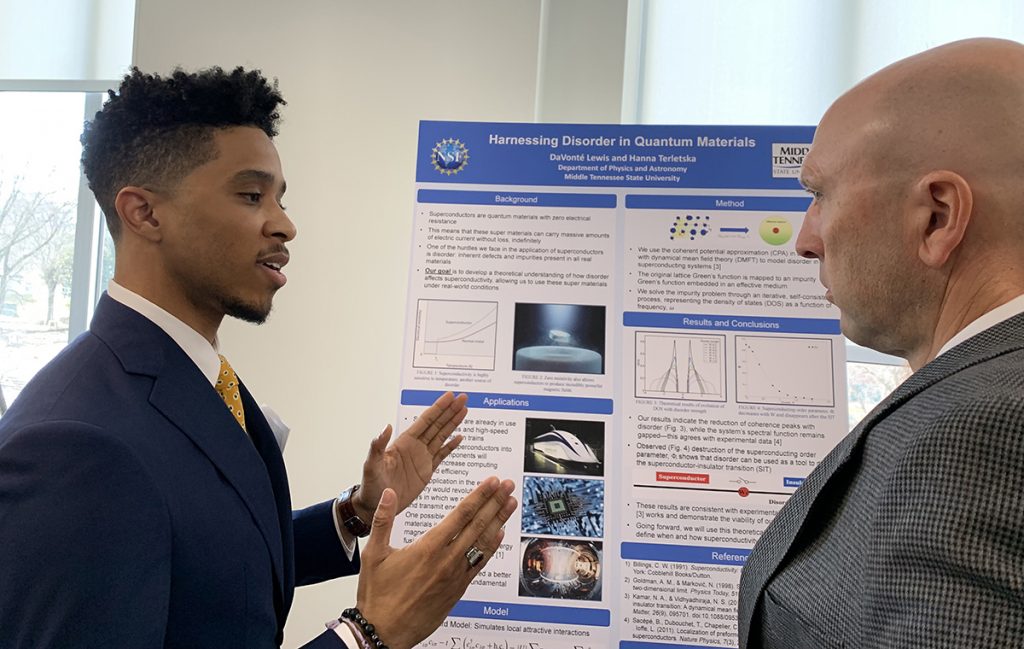 Physics major DeVonte Lewis, whose research has been superconductors that are 21st century quantum materials, is another MTSU senior being pursued by major universities, including Johns Hopkins, Michigan and Ohio State.

“We used a paper by (Abdelkader) Mouadili and we tested out his theory,” Vazquez said of the Morocco professor listed first on the 2020 paper.

“Then we compared it to COMSOL, which is computerized simulation, and we also did it experimentally, so that all three things align up,” she added. “Right now, what I’m working on is the electrical analog of it, so I’m trying to see if the theory also works for electricity wires.”

Senior biology major Logan Carver of Nashville, who plans to pursue a career in medicine and medical research, studied a form of cancer (neuroblastoma) originating in the nerve cells and affecting children.

“Personally, I’ve many experiences in my life, for example, my mother (Sharon Hoover) has multiple sclerosis, and people close to me have had cancer and either passed away or are in remission.,” said Carver. “That’s why this research means a lot to me. … If there’s anything that I can do to contribute to society where there’s less cancer, then I’m going to do that.” 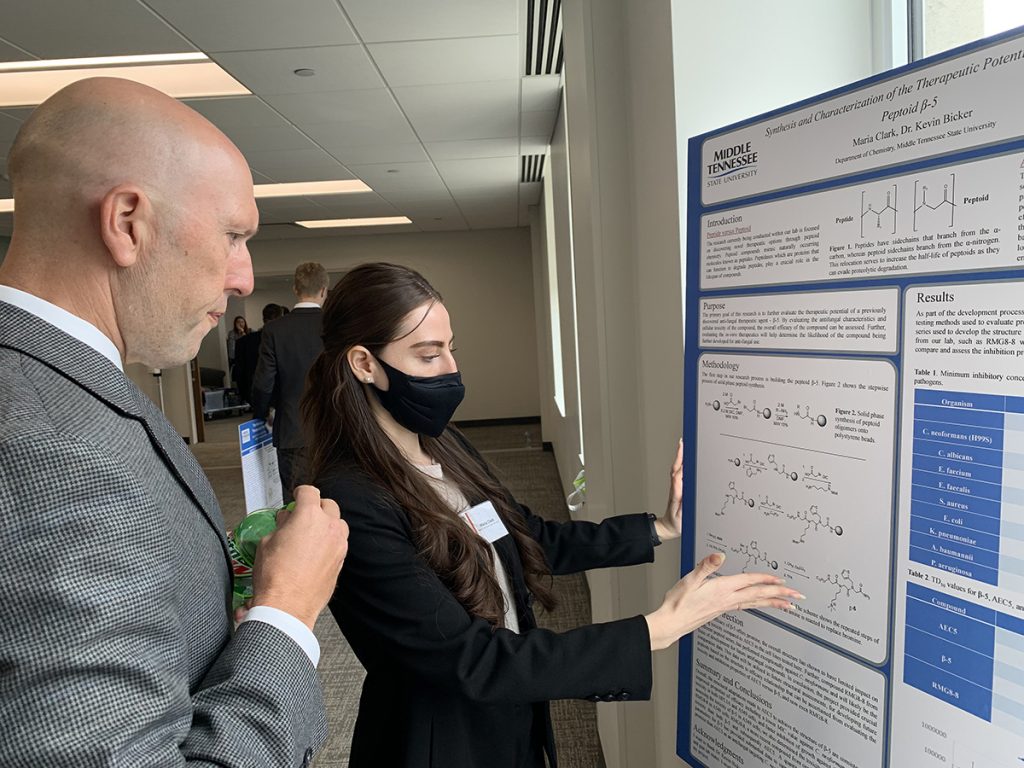 MTSU chemistry major Maria Clark, left, talks about her undergraduate research with Greg Rushton, director of the Tennessee STEM Education Center and a chemistry professor, Wednesday, Feb. 16, during the annual Posters at the Capitol. Clark was among seven MTSU students and nearly 40 altogether participating in the event in the Cordell Hull Building in Nashville. (MTSU photo Randy Weiler)

Greg Rushton, Tennessee STEM Education Center director, credited “the Capitol staff having supported the organization of the event and the committee, given all the challenges of the pandemic.”

Regarding the variety of research this year, Rushton said he’s “seen things from cancer/biology to video game development for literacy to quantum materials in physics to fetal growth in rats using some biochemical processes.

“So, it’s exciting every year to see the incredible work that undergraduates can do across our state in the laboratories they’re working in.”

University President Sidney A. McPhee led an MTSU delegation visiting lawmakers for MTSU Day on the Hill the same day as the posters event. 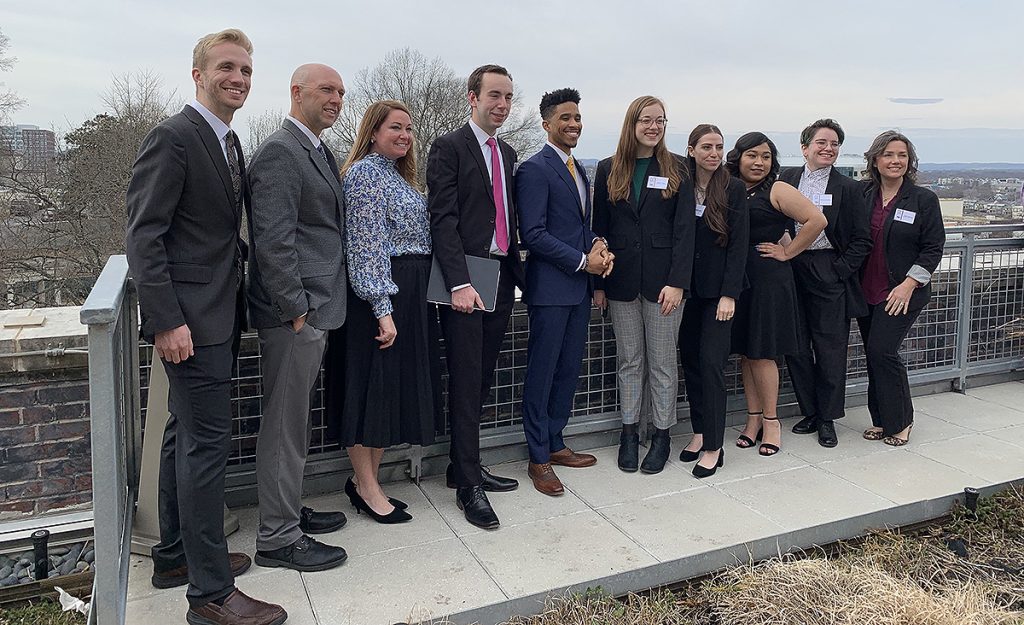 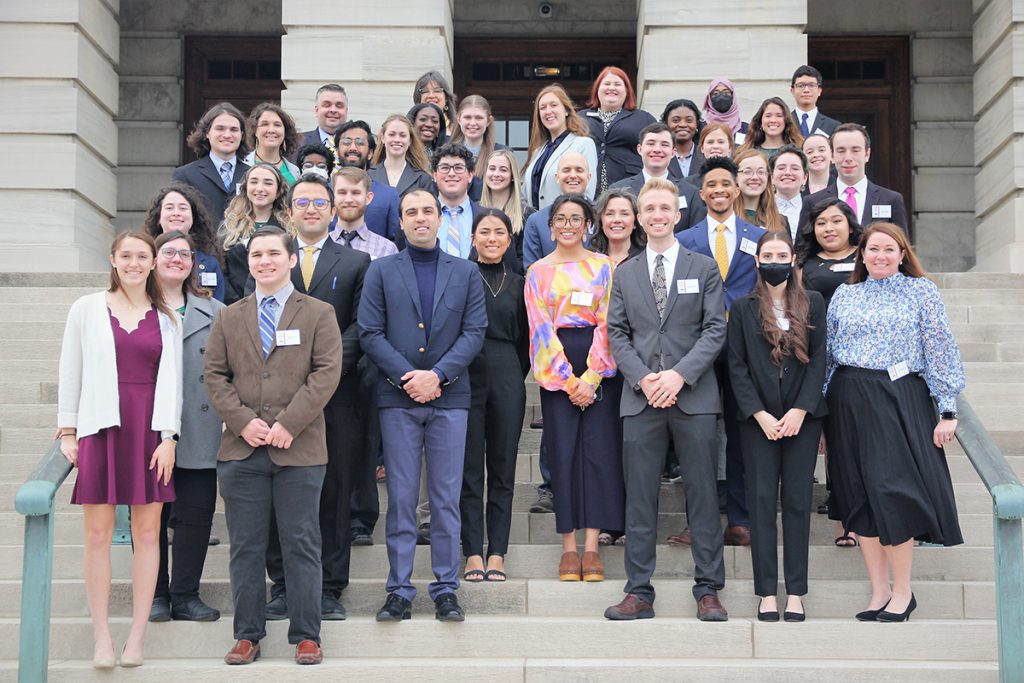 University students from across Tennessee joined MTSU at the annual Posters at the Capitol Wednesday, Feb. 16. They met for a photo outside State Capitol in Nashville. All performed STEM (science, technology, engineering and math) research. (MTSU photo by Javier Hernandez)