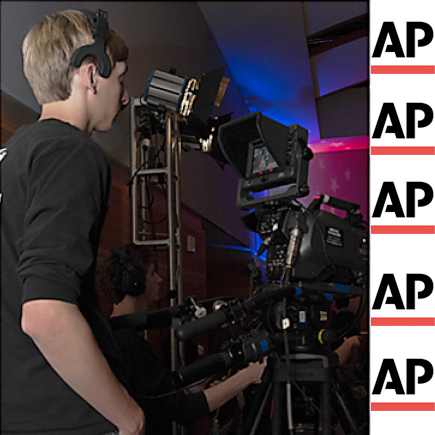 The winners announced at the April 27 event were:

The judges praised Anfinson’s work as “nicely crafted” and said he “has a relaxed, very conversational style that never leaves the listener behind.”

The Nov. 6 presidential election coverage, which was headquartered in the Center for Innovation in Media in the college’s Bragg Mass Communication Building, became a special campus event alongside its Student Union ballroom remote location.

“This coverage plan rivals some commercial newsrooms. The plan was ambitious and executed well,” the TAPB judges said. “The panel of experts, combined with live shots, ticker and results, made this a complete night of election coverage.”

The awards were presented at a luncheon that followed morning panel discussions on “The Scoop on Finding Your First Journalism Job” with recent MTSU grads now working in the industry and “The Good News about the News Business” with area radio, TV and social media professionals. The afternoon featured one-on-one sessions with more media professionals.

“It was outstanding to see our students competing with those from Vanderbilt, UT-Knoxville, Lipscomb, UT-Martin, Tennessee State and other schools from the region,” said Dr. Roy Moore, dean of the college.

“I spoke with several of our students and alumni at the TAPB event, and they spoke highly of the role the Center (for Innovation in Media) either played in their education here or how they wished such a center existed when they were here.”

The Associated Press Media Editors recognized the Center for Innovation in Media last year for its efforts to converge MTSU student media and foster collaboration across media platforms.

For more information on the Department of Electronic Media Communication at MTSU, bookmark its blog at http://emcmtsu.com.