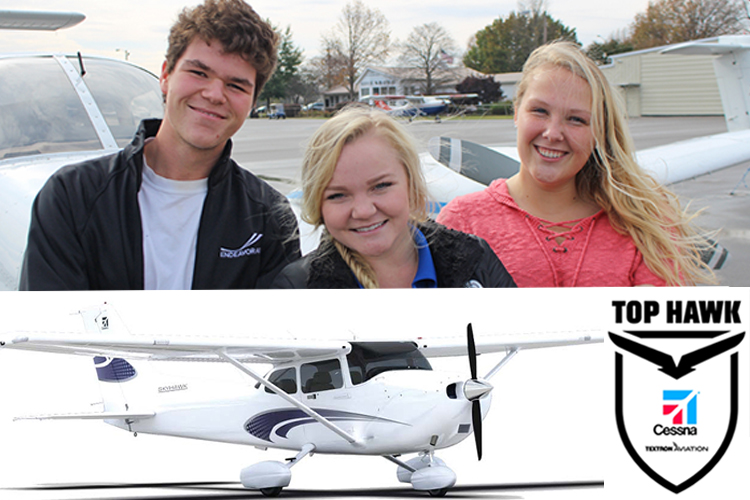 Textron Aviation has chosen Middle Tennessee State University’s Department of Aerospace to use a new Cessna aircraft as part of the company’s Top Hawk program for 2018.

Textron Aviation will provide a new 2018 Cessna Skyhawk 172, considered the most popular training aircraft in the world, to the university to support pilot training, promote general aviation and connect future pilots to higher education.

Through Textron’s Top Hawk program, MTSU will be able to use the new custom-branded plane from February to September.

The Cessna Skyhawk, considered the most popular training aircraft in the world, will be the latest addition to MTSU’s promotional fleet, thanks to a usage agreement with Textron Aviation. Textron selected MTSU and four other universities to use the plane from February to September 2018. (Photo submitted)

Flight instructors in the Department of Aerospace will showcase general aviation throughout the region as MTSU attends air shows, participates in summer camps for teens and teachers, and hosts aviation days with area high schools, along with participation in the Air Race Classic.

“We could not be more excited to partner with Textron Aviation as part of this program,” said Nicholas Lenczycki, program manager for MTSU Flight Operations.

“Textron is a world-class organization, known throughout the world for their capable aircraft. To be able to provide our students and community an opportunity to explore general aviation with the latest technology is just another example of how MTSU provides high quality experiences to our students.”

In addition to several regional airshows, MTSU plans to attend the 44th Sun ’n Fun International Fly-in & Expo in Lakeland, Florida, in April. One of the largest airshows in the country, Sun ’n Fun hosts more than 200,000 guests from 60 countries.

“Sun ’n Fun is an opportunity for MTSU to reach students in a new way,” said Lenczycki. “While we normally have a booth at Oshkosh, the largest fly-in in the country, being able to fly into an airshow of the magnitude of Sun ’n Fun is going to attract a lot of attention for the university.”

The annual Air Race Classic is an all-women cross-country air race. Teams of at least two female pilots must fly under visual flight rules during daylight hours; they’re given four days to make flybys at each en route timing point and then land at the terminus.

The 2018 race begins June 19 in Sweetwater, Texas, and ends in Fryeburg, Maine. The MTSU team will use the Cessna Skyhawk as their race aircraft.

“The Top Hawk is a great opportunity for the MTSU aerospace department,” said Elizabeth Keller, a senior aerospace major and one of the university’s pilots for the 2018 Air Race Classic.

“I can’t wait to use the plane for the air race next summer, but, beyond that, I’m excited to use the Top Hawk to spread the word about aviation and the incredible aerospace program MTSU offers. We can’t thank Cessna enough!”

Established in 1942, MTSU’s aerospace department in the College of Basic and Applied Sciences has grown into one of the most respected aerospace programs in the nation. Fifteen full-time faculty members, 35 flight instructors and more than 700 majors places it among the largest of the nation’s collegiate aviation programs.

Textron Aviation Inc., a Textron Inc. company, is home to the Beechcraft, Cessna and Hawker brands, which account for more than half of all general aviation aircraft flying. Its principal lines of business include business jets, general aviation and special mission turboprop aircraft, high performance piston aircraft, military trainer and defense aircraft and a complete global customer service organization.

MTSU aerospace students Harry Arcamuzi, left, Charlie Hansen and Elizabeth Keller celebrate their successful application for Textron Aviation’s annual “Top Hawk” competition. The trio prepared the application for the program, which will allow MTSU to use a Cessna Skyhawk 172 from February to September 2018 to promote the university’s aerospace program. Keller plans to fly the Skyhawk in the 2018 Air Race Classic. (MTSU photo by Nick Lenczycki)