MTSU, the Military, and the Middle Line

MTSU, the Military, and the Middle Line 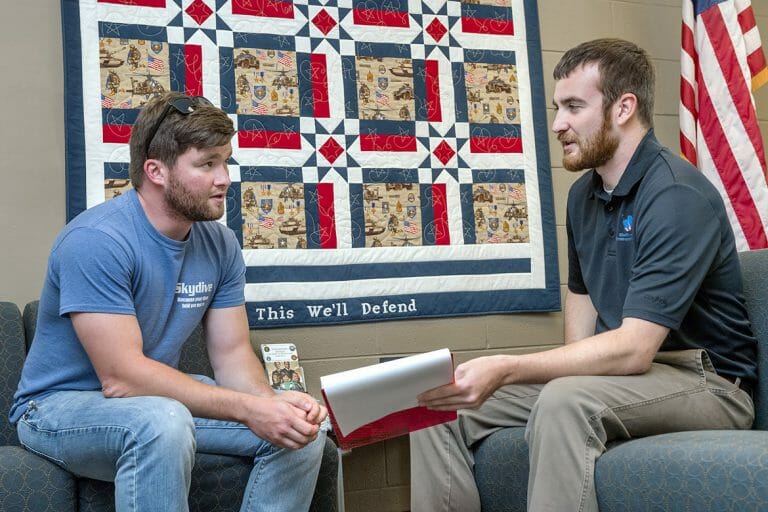 MTSU has always been ready to jump to the front of the line in efforts to help their students, which also extends to its support of veterans, active military, and their families, being named one of the Top 50 Best Colleges for Veterans by Military Times for four consecutive years.

As a student as well as an “Army Brat,” the affectionate title given to children of army veterans, the outreach here on campus has been like coming home. Being a military kid sometimes feels like being stuck in the middle of two worlds: not quite a soldier, but not quite a civilian either. You can’t claim to be actually military, but you also don’t know how to relate to peers who haven’t lived on and off bases, or went through harrowing deployments, or experienced war on their own doorstep. It’s a balancing game of two worlds, and sometimes, we feel forgotten in the middle.

This is a similar conundrum for student veterans as well. Between 2000 and 2012, more than 900,000 military members enrolled in universities and used education benefits through the Veterans Affairs. The largest increase, with a spike of 42%, occurred between 2009-2010 when the Post 9/11 G.I. Bill took effect. Although student veterans make up only 4% of the national student body, the number is expected to increase as more service members return from the Middle East.

The increase in enrollment, however, doesn’t necessarily signify an increase in student veteran success. Many student veterans have spoken about the displacement and sense of loneliness they felt when entering the college lifestyle, which goes on to affect not only their academic standing, but also their personal lives.

“It was a hard switch,” said Kevin Hicks, a student veteran at MTSU. “It’s like your own code, being a veteran. Sometimes I go around other twenty-year-olds and they’re like ‘What are you saying?’ and they just don’t understand you. It can be very isolating.”

Hicks, a senior in the aviation program who just celebrated his 27th birthday, has served multiple tours overseas and knows first-hand the struggles of making the transition from military to civilian life.

“(The military) was very cut and dry. Once you’re in, you’re married to it. It becomes its own commitment,” he said. “You get back from overseas, and everything’s crazy.”

That’s why MTSU is considered a leader in military outreach on campuses across the nation. Thanks to the efforts of countless people inspired to make a difference, MTSU is one of the first institutions of higher education in the state- and one of the first in the country- to work with the Veterans Affairs VetSuccess program. This partnership, directed by Dr. Hilary Miller, is housed in the Charlie and Hazel Daniels Veterans and Military Family Center, an innovative resource center dedicated to helping veterans and military families adjust to and succeed in the college environment.

MTSU President Sidney A. McPhee, left, first lady Elizabeth McPhee, Hazel Daniels, Charlie Daniels and Keith M. Huber, senior adviser for veterans and leadership initiatives, are shown with the new Charlie and Hazel Daniels Veterans and Military Family Center logo unveiled Aug. 23 in the celebration recognizing them and The Journey Home Project for the gifts totaling $120,000 for the center. The patriotic fiddle, autographed by Charlie Daniels, is a gift from him and the foundation for the center.

Miller knows what it’s like to be part of a military family in that forgotten middle line. As both the wife and sister of active duty military, Miller knows the struggles of finding support for both veterans and military family members. This struggle, she said, is reflected in the name of the Center.

“When we initially started, we made a mistake,” Miller said, holding up an outdated name tag like a memento. “And I have this thing here to remind me that we made a mistake. We first called it the Veterans Success Center. It didn’t go very far. It probably only went two or three weeks with the name tags, and then we had to get new ones because we realized that this was about veterans and military families; that we were dedicated to families as well. And that needed to be in the name.”

This renaming not only helps the student veterans feel at home, but also helps family members find where they fit in. The inclusion of two conference centers, along with advisor workplaces, reception areas, a student computer area, and a kitchenette help veterans and family members come together in one room with a common purpose. The entire program, she explained, was designed with the purpose of recreating the feeling of teamwork, unity, and commitment that is prevalent in military life.

“We have a five-point mission, which is to enroll veteran and military family students, encourage them, help them find employment, educate the MTSU community, and then educate those outside of the MTSU community,” said Miller. “All of us are responsible for enrolling them and making sure they get through successfully, and then ultimately finding jobs. And we’re very focused on this.”

This focus has been felt by each and every veteran and military family member that have come through Miller’s doors.

“The mass amount of vet resources here has helped me more than I can even describe,” Hicks said. “It was like being blind my whole life, and then suddenly being able to see, and everyone is showing you what you missed. That’s what MTSU has done for me.”

Besides Miller’s extraordinary dedication, there have been other unstoppable forces that brought this vision to life.

One such influence was LTG (R) Keith M. Huber. Currently working as the Senior Advisor for Veterans and Leadership Initiatives here at MTSU, Huber served for 38 years in the Army and knows well the issues facing student veterans.

“Student veterans aren’t at universities for the college experience,” Huber said in an interview with the Center’s Journey magazine. “They’re here because this is their next mission.”

Keith M. Huber, senior adviser for veterans and leadership initiatives at MTSU and retired U.S. Army lieutenant general, speaks during the 2017 MTSU 9/11 Observance at the Military Memorial site outside the Tom H. Jackson Building, recalling where he was Sept. 11, 2001, and how it affected the latter years of his military career before his retirement. (MTSU file photo by J. Intintoli)

Following a speech at MTSU and a consequent meeting with President McPhee back in early 2015, Huber was offered to head the veterans support effort on campus. Huber declined, however, on the grounds that he needed to understand the issue from the student’s perspective first. So Huber went on a mission to speak to every student veteran he could find. When he presented his findings to McPhee in March, he knew he had accomplished his goal. Armed with endless numbers, notes, and needs, Huber knew he had a grasp on what this campus needed.

Following this decisive and undoubtedly correct analysis, McPhee offered Huber the 2,600 square foot facility and $329,000 to fully create the veterans center. With the additional help from musician Charlie Daniels and his wife Hazel, who donated $120,000 to the center and offers their continuous support, the center has flourished to become one of the most dedicated veterans and military family academic centers in the country. The above-and-beyond efforts of Miller and Huber have not gone unappreciated by the campus veterans and family.

“Dr. Miller and LTG Huber are just phenomenal. When Huber looks you in the eyes, he means it. If I could be an ounce of what that man is, I will have achieved something in my life,” said Hicks.

“Our university is so good that they put in this humongous effort. I can’t even calculate the research went into the creation of the Center- it’s a big deal,” said Miller. “We do a lot of things to make sure that folks know that our veterans and family aren’t just brave and strong, or good on the ground, but that they’re also so smart.”

With the unmatchable support offered by MTSU and the Daniel’s Center, both veterans and military family members alike can be sure that the transition from military life to campus life will be as successful as possible, and that no one will ever be forgotten on that middle line.