Art professor ‘pops up’ for ch.. 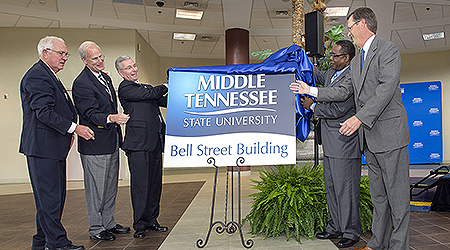 The university will pay $11.1 million for the 17.4-acre site, which includes:

MTSU President Sidney A. McPhee and Gordon Ferguson, president and CEO of Middle Tennessee Medical Center, marked the change of ownership in a ceremony at the Bell Street Building attended by administrators from both institutions as well as community leaders.

“For nearly 85 years, our two campuses anchored the east side of Murfreesboro and served for much of that time as two of largest employers in our community,” McPhee said, “but we shared much more than proximity and size — our two organizations also share many common values.

“Today’s ceremony marks the next step in that relationship and underscores the importance we place on serving the needs of our students and the community.”

MTMC had been looking for a buyer for its old hospital site since its move into a $267 million medical campus in October 2010. Its seven-acre site on Medical Center Parkway is more than four times larger than its old location, where the hospital was established in 1927.

“We continued a legacy of innovation and advancement at our Bell Street location, serving the community with outstanding medical care,” Ferguson said. “With the sale of this land, we pass along that legacy to our partner MTSU as they now grow and create new opportunities for our community.”

McPhee said the university will use the Bell Street Building for academic purposes. He said, however, that final decisions on which units and operations will occupy the space have yet to be determined.

“Once we acquire the property, we will determine the best and most appropriate use for the facility,” the university president explained.

“It will be used for academic purposes, and while we are considering several options, we have yet to make a final decision on what would be best at that location.”

This view of the old Middle Tennessee Medical Center site, looking north from East Lytle Street to East Bell Street, shows most of the 17.4-acre site along North Highland Avenue. It includes green space, a 115,000-square-foot building at right and a 143,000-square-foot parking garage at left. (MTSU file photo by News and Media Relations)

University spokesman Andrew Oppmann said the Bell Street Building will require some renovations to change its usage from medical to academic.

“We will need to determine what work needs to be done and how long that work will take — all of which will factor into our decisions on how the facility will be used,” Oppmann said.

He added that the university currently has no plans for the old hospital parking lot and that the area will remain open green space for the foreseeable future.

McPhee said the university will be “good stewards of this facility and good neighbors to our community and use it to better serve our students and the people of Murfreesboro and Rutherford County.

“We are extremely proud to have worked with Gordon and his staff, Lee (Moss, chairman of the MTMC board of directors) and the hospital board and the entire Saint Thomas Health Services family to make this a reality,” McPhee continued.