'MTSU On the Record' celebrate..

MTSU turns heads with work for Hulu at Bonnaroo [+...

MTSU turns heads with work for Hulu at Bonnaroo [+VIDEO] 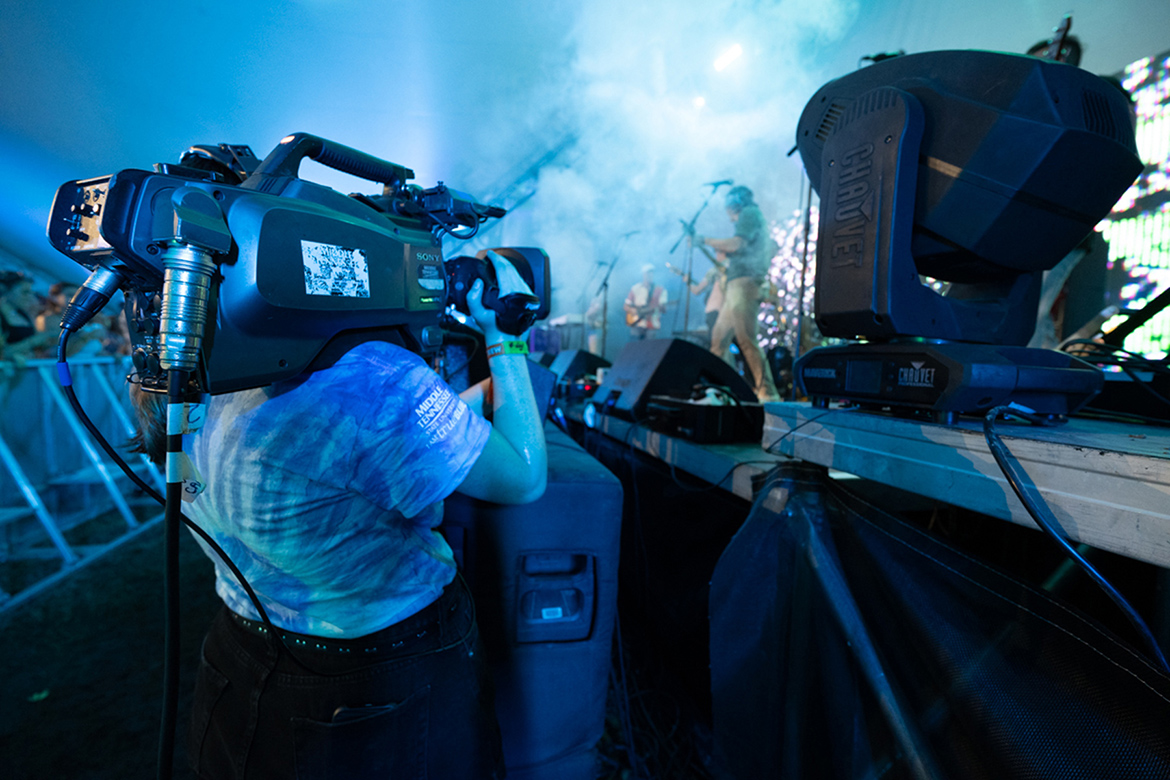 by Lily Manyara and Andrew Oppmann

This past weekend, he teamed with students and faculty from Middle Tennessee State University’s College of Media and Entertainment to capture DJ acts on Bonnaroo’s Other Stage for Hulu, one of the world’s largest streaming services.

And Steel said he’s been impressed by what he’s seen from MTSU students at The Farm.

“This is really cool what y’all are doing,” Steel, who is working at Bonnaroo for Los Angeles-based Fortress Productions, said Sunday, the last day of the 2022 festival. “Big hats off to MTSU.

“You guys are moving the needle, in my opinion, by giving students first-hand experience, in real life. This is where it happens. I mean, classrooms are amazing, where you build a foundation. But to be able put it into action, this is where it’s at.”

The partnership between MTSU and Bonnaroo dates back to 2014, coming back in full force this year after a 2020 pandemic pause and a 2021 weather cancellation. It is an annual labor of love for Media and Entertainment students, who earn college credit for their work in video and sound production at Bonnaroo’s event stages and gain valuable experience in content creation, including video and photo storytelling and digital reporting.

“I have produced hundreds of live events and can say, without question, that MTSU student production team’s work was top notch and the work looked amazing and fit seamless into our overall programming.  Their composure in being part of a national broadcast with A-list artists is a testament to their skills and of MTSU’s programs,” said Devin DeHaven, executive producer for Bonnaroo/Hulu/Fortress Entertainment.

You can watch the video podcast from Day 4 at Bonnaroo below:

As the dust begins to settle, literally and figurately, on the final day of this year’s Bonnaroo, MTSU students were still hard at work.

Students in Media Arts and Recording Industry were scheduled only to do two concerts for Hulu. But Bonnaroo and Hulu executives were so impressed by MTSU’s work that they upped it to 11 concerts from the Other Stage, in addition to the 10 recorded performances at the Who Stage, said Bob Gordon, an associate producer in Media Arts.

“That means we will have done 21 video concert performances in four days, from two stages that were a mile apart,” Gordon said. “That is a first for us.”

Audio Production professor Michael Fleming agreed, saying, “This crew of graduate and undergrad students met the challenge of producing network quality programming with confidence and steadiness that makes us proud. “

Among that crew was Houston Chapman, a video and film production junior from Nolensville, Tennessee. He was among the students sweating behind a camera or behind the scenes at the Who Stage.

“I learned a lot about the entertainment industry and live festival productions,” Chapman said. “It was really cool to see how it all comes together and what roles everyone has.”

Gordon said he anticipates an even greater role for MTSU students at next year’s Bonnaroo — and perhaps beyond the Farm — thanks to the quality of their work.

“We have greatly impressed the pros, with conversations beginning for more exciting projects in the future.”

“The MTSU team has consistently displayed a level of professionalism and technical proficiency we’d expect from any other team we work with,” said Ellis. “They are clearly hungry to be a part of the community and as an alumnus, personally, they have made me very proud.”