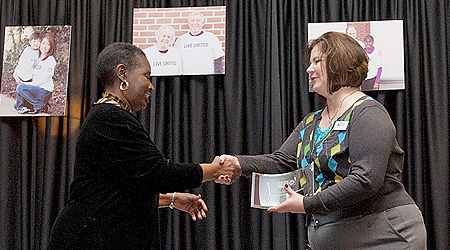 Middle Tennessee State University has landed in the Top 10 again, this time as part of the United Way of Rutherford and Cannon Counties’ announcement of a record-breaking $2.955 million in secured pledges for its 2011 fundraising campaign.

Dr. Gloria Bonner, left, accepts an award Feb. 20 on behalf of MTSU from 2011 Campaign Chair Tracy Toy as one of the Top 10 Campaigns for the United Way of Rutherford and Cannon Counties. At right is UWRCC President and CEO Brian Hercules. (MTSU photo by Andy Heidt)

The University met its own “100% for the 100th” goal in its complete Employee Charitable Giving Campaign for 2011-12, raising a total of $112,304.36 to be distributed to Independent Charities, Community Health Charities and Community Shares as well as the United Way of Rutherford and Cannon Counties.

The “100% for the 100th” theme reflected the University’s effort to increase employee participation in its Centennial year among its 2,200-plus employees. Seventy-five percent of MTSU’s donors designated their dollars for United Way.

The top 10 campaigns, in order of total funds raised for United Way, included: