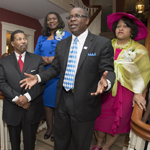 More than 200 community members welcomed new Tennessee State President Glenda Baskin Glover to the Midstate during an April 30 reception hosted by MTSU President Sidney A. McPhee on the Murfreesboro campus.

MTSU President Sidney A. McPhee, second from right, with first lady Elizabeth McPhee, right, welcome TSU President Glenda Glover, second from left, and her husband, Charles, during a reception at the President’s Residence on April 30. (MTSU photo by Andy Heidt)

The event, organized by McPhee and his wife, Elizabeth, at the MTSU President’s Residence, also allowed the CEOs to confirm and praise the partnerships already in place between the two Tennessee Board of Regents institutions.

“As sister institutions, TSU and MTSU both are committed to serving the citizens of Tennessee,” McPhee said. “President Glover shares my devotion to student success and, together, we will work to support our state’s goal of producing more college graduates.”

TSU President Glenda Glover, right, meets Dr. Gloria Bonner, special assistant to the MTSU President’s Office, during a reception for Glover and husband Charles at the President’s Residence on April 30. Standing behind Bonner is Dr. Michael Allen, dean of the College of Graduate Studies.

Glover, a 1974 TSU graduate, became the eighth president of the Nashville institution in January. She thanked McPhee for the welcome and also praised the collaborations in place between the two universities.

“I will be forever grateful to MTSU President Sidney McPhee and first lady Elizabeth McPhee for opening their home up — not only to me, but to the entire Tennessee State University family,” Glover said. ” It is always humbling to meet colleagues who are willing to extend a welcoming hand a lend support.

“Our professional friendship has truly blossomed and will serve as the catalyst as our two institutions partner to have greater successes in educating students and empowering our respective communities.”

Murfreesboro Mayor Tommy Bragg, who delivered brief remarks to attendees, said he was pleased to see that the presidents of the two nearby universities were committed to working together on behalf of students and taxpayers.

MTSU and TSU collaborate on several academic programs, including:

TSU President Glenda Glover, front right, chats with guests during a reception for her and her husband, Charles, at the MTSU President’s House April 30 in Murfreesboro.