Swing into the holiday season .. 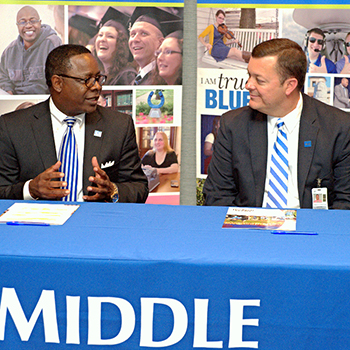 The agreement, the first of its kind between the university and an entire district, focuses first on creating ties between the district’s schools and MTSU’s Honors College.

McPhee and Williamson County Schools Superintendent Mike Looney negotiated the memorandum of understanding after an October meeting of county principals and university executives hosted by MTSU.

“Williamson County Schools and Middle Tennessee State University will continue to build on the great relationship that has already been established,” Looney said. “I look forward to working together to pursue even more opportunities for our students and staff with MTSU.”

McPhee echoed Looney’s sentiments and said he had made strengthening ties in Williamson County a priority. McPhee added the True Blue Tour stop shortly after the October meeting and will be hosting an on-campus visit by district principals on Dec. 2.

“We want Williamson County students and parents to take a closer look at all MTSU has to offer,” McPhee said. “There are many great opportunities on our campus that we would like for this county’s students, educators and parents to explore.”

Looney told McPhee he was interested in establishing ties to the university’s Honors College, which the MTSU president said “fosters the academic excellence and nurturing environment of a small, select, private, liberal arts college within the setting of a major university.”

The district, which consists of nine high schools and 32 elementary and middle schools, consistently ranks among the best school districts in Tennessee and has outpaced national rankings on a number of measures.

Farmer considers it “an awareness opportunity” for Williamson County students.

“It’s hard for me to fathom our kids looking beyond 30 miles for a college,” said Farmer, who grew up in Murfreesboro and whose father, Larry Farmer, retired after 30 years as an MTSU accounting professor. “When you factor in dual enrollment, that’s a bonus.”

McPhee and Looney also pointed to the university’s $147 million Science Building, touted as one of the top new academic facilities in the nation, as a potential resource.

The agreement also encourages the development of additional dual enrollment courses for district high schools under the auspices of MTSU, with a particular emphasis on the university’s signature programs.

Dual enrollment allows high school students to take college courses while they are still enrolled in a secondary school — and earn credit from both institutions. MTSU already has dual enrollment partnerships with several schools in Rutherford, Williamson and other Tennessee counties.

“This partnership will provide a more robust academic pathway for our kids to parlay into post-secondary education,” said Farmer, who anticipates the relationship expanding to include the new Nolensville High School, which is scheduled to open in August 2016 with Principal Bill Harlin already on the job, and Fairview High School under Principal Juli Oyer.

Many more traditional programs — agricultural science, nursing, media, accounting, and education, among others — are considered to be among the best in the region.