Winning at the Game of College.. 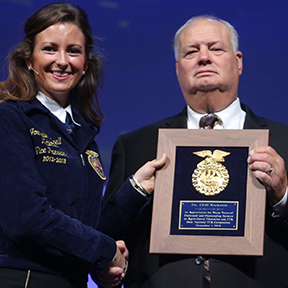 Future Farmers of America Eastern Region vice president Joenelle Futrell of the University of Kentucky presents MTSU School of Agribusiness and Agriscience professor Cliff Ricketts with the National FFA VIP citatation award for his many years in agricultural education and numerous efforts with FFA on a local, state and national level. (Submitted photo)

In receiving a National Future Farmers of America VIP citation this year, MTSU School of Agribusiness and Agriscience professor Cliff Ricketts did not have to drive more than 5,000 miles using only 2 gallons of gas.

All Ricketts, who has achieved notoriety for his alternative fuels research, had to do was:

• Guide more than 300 agriculture education majors to teaching careers throughout the years;

• Serve as a judge for the National Agriscience Fair and be an evaluator of American FFA Degree applications;

• Assist with the floriculture and nursery landscape career development events at National FFA conventions for a number of years;

• Help Tractor Supply Company with its FFA career show for 15 years; and

• Be a lifelong friend to FFA and its endeavors with young people in agriculture.

Ricketts received a VIP citation from the FFA, which recognizes his significant contributions and dedication to FFA and agricultural education. The award was presented Friday (Nov. 1) at the National FFA convention in Louisville, Ky.

“It means a lot to me and a great honor,” said Ricketts, a Mt. Juliet resident and 38-year MTSU faculty member. “It puts me in the top echelon of people in the National FFA.”

Emily Marshall, a Riverdale High School teacher and FFA adviser and member of the Tennessee FFA Association board of directors, nominated Ricketts for the award. Her husband, John, is an MTSU alumnus and one of Ricketts’ former students.

“He has worked a long time in ag education, and is known all across Tennessee and outside of Tennessee,” Emily Marshall said of Ricketts. “He’s one of the most courteous and friendly people I know. He’s the type of person who deserves this recognition.”

National FFA Organization CEO Dwight Armstrong said the VIP citation “recognizes the dedicated individuals who contribute to the FFA mission of student success through their hard work and cooperation.”

“Without such strong and outstanding commitment, FFA would not be able to help build strong character in its members, which in turn build strong families, communities and industries,” Armstrong added.

The National FFA provides leadership, personal growth and career success training through agricultural education to 557,318 student members in grades seven through 12 and who belong to one of 7,498 local FFA chapters in the U.S., Puerto Rico and Virgin Islands.

In both 2012 and 2013, Ricketts-led teams drove coast-to-coast (Tybee Island, Ga., to Long Beach, Calif.) using only 2.15 gallons of gasoline. His trip this year used no gas. His fuel sources: the sun (solar) and hydrogen from water, all manufactured on the MTSU campus.