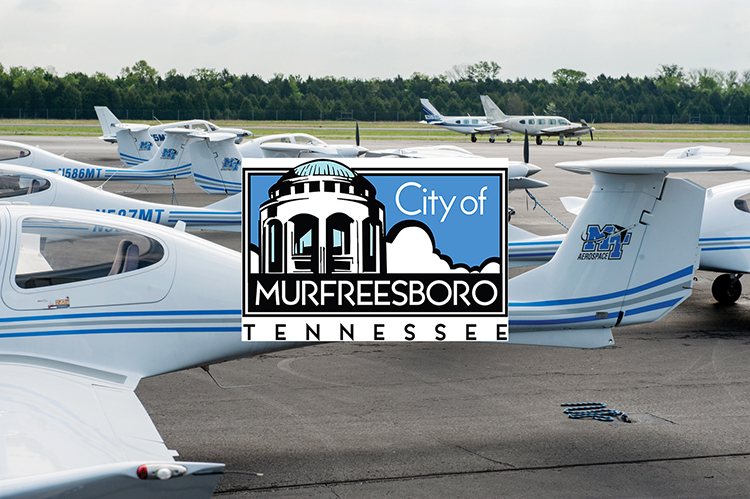 The city of Murfreesboro Municipal Airport has been awarded a 2020 Aeronautics Economic Development Fund grant of $1 million, the maximum grant approved from the Aeronautics Division of the Tennessee Department of Transportation, the city announced Wednesday, Jan. 15.

“The development strategy for this fund is to impact job creation and investment opportunities in Tennessee’s aviation industry,” said Aeronautics Director Michelle Frazier in a Jan. 10 letter to Municipal Airport Director Chad L. Gehrke. “We are pleased to provide funding for this economic development project. Our aviation facilities are critical to the economic development of communities across the state.”

This economic development grant will be used toward the expansion of the apron at the Middle Tennessee State University Aerospace Airport Campus, according to a city of Murfreesboro news release. Construction will include the development of Taxiway E, which will allow for aircraft to maneuver in and out of new facilities. The facilities will be built on the MTSU airport campus in the near future.

The MTSU Aerospace Department has experienced over 30% growth in the last three years. Today, more than 1,000 students are enrolled in the nationally-recognized program. To keep up with this growth and aviation industry demands, the Aerospace Department is working with the university and city on a new master plan for their facilities at the airport.

“The Aerospace Department is very excited the Airport grant request was approved, allowing this piece of infrastructure development to move forward quickly,” said Wendy Beckman, department chair. “The rapid growth the department has seen in the last several years means additional facilities and aircraft parking are badly needed, and this project will be the cornerstone of that development.” 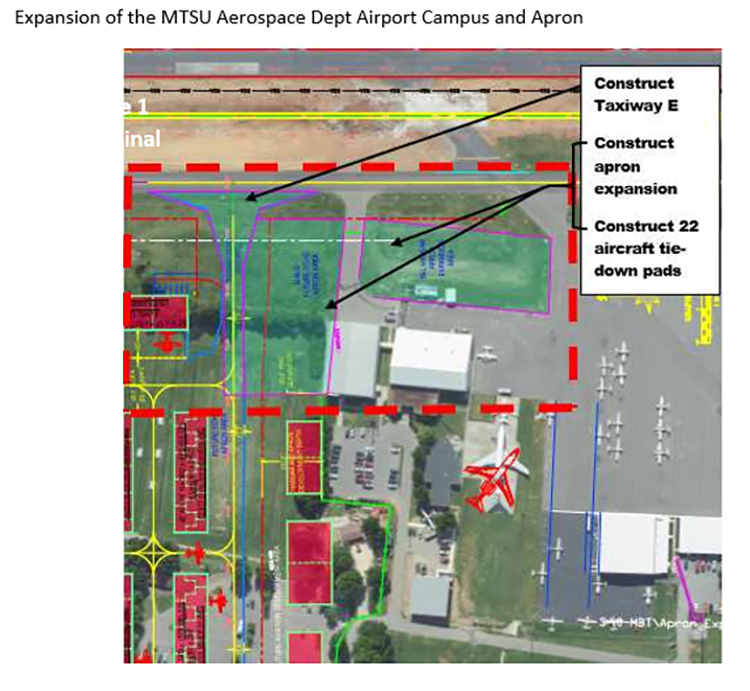 A recent study conducted by the MTSU Business and Economic Research Center with assistance from the MTSU Aerospace Department concluded that the MTSU Airport Campus would have to increase its hangar, briefing rooms, labs, classrooms, and office space from around 44,000 square feet to over 102,000 square feet. This expansion would create jobs such as flight instructors, faculty positions, and additional staff.

The new aeronautics grant is key to providing the infrastructure to address the MTSU Aerospace Department’s immediate needs along with supporting their future expansion plans.

In June 2019, the Tennessee Aeronautics Division awarded the Municipal Airport a $2 million Airport Economic Development Grant for the South Terminal Development Project. The grant is being used toward the construction of a large aircraft, maintenance and storage hangar, offices, apron expansion, and the removal of the old Quonset-style hangar.

“The new airport terminal will be three times bigger than the existing terminal,” said Gehrke in the release. “We want the terminal to present air travelers with the best impression possible and to fulfill the needs of a growing city for the next half-century.” 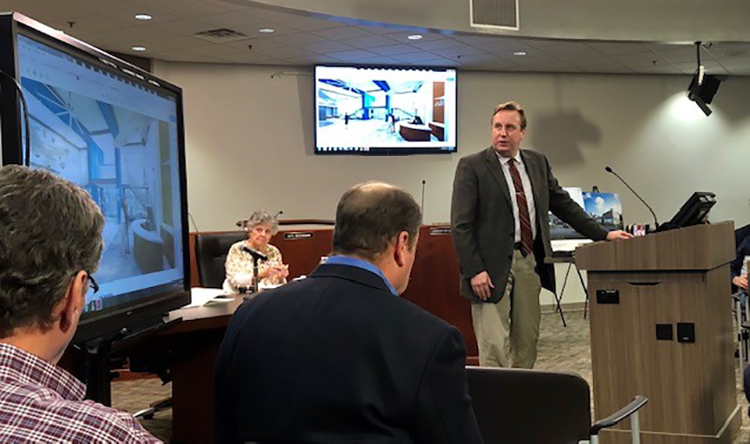 In this December 2018 file photo, Murfreesboro Municipal Airport Director Chad Gehrke gives a presentation on airport renovations to the City Council. (Courtesy of the city of Murfreesboro) 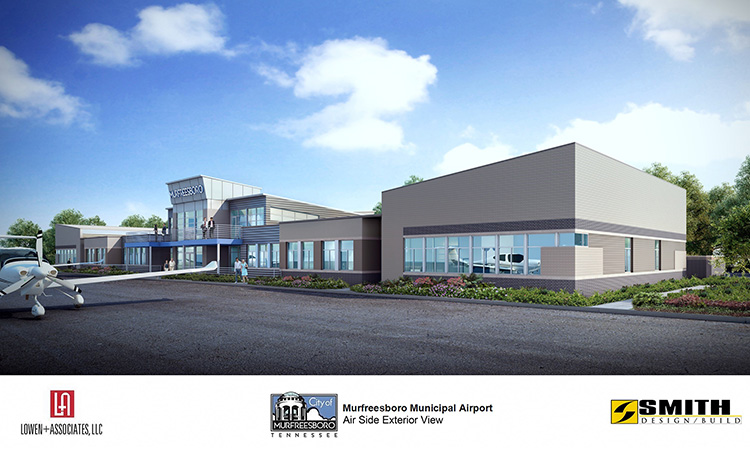 This artist rendering shows an exterior view of the new Murfreesboro Municipal Airport Terminal under construction. The $4.5 million project is expected to be finished in August 2020. (Courtesy of Lowen+Associates LLC)

The terminal will include a raised observation area with stairs leading to the main lobby and to an outdoor balcony, the release states. A catering kitchen with ample storage can serve a large leasable Business Conference Center accommodating 75 people. The center will provide patrons with a view of the airfield.

On the exterior runway side, a mezzanine will extend outside to an observation deck to allow for easy-viewing of air traffic. On the land side, entrance to the terminal exterior includes multiple-vehicle parking around the existing circular area where the flag pole is currently located. Earth tones with accents in metal, tall glazing and brick create a feel for use beyond an airport terminal.

Watch a two-minute Murfreesboro CityTV video from December 2018 on the Airport Terminal below: