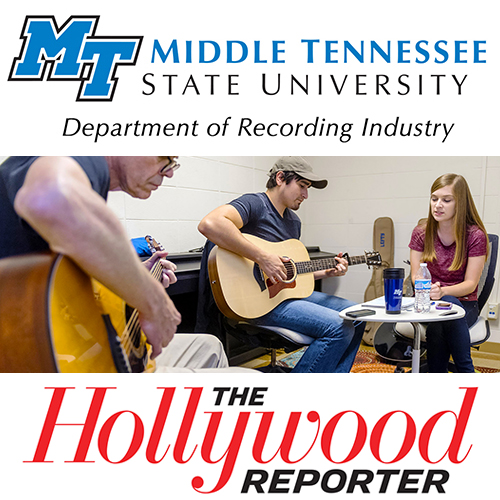 For the third straight year, MTSU’s Department of Recording Industry is part of an international list of acclaimed music schools praised by The Hollywood Reporter that includes Juilliard, Berklee and London’s Royal College of Music.

The department is No. 18 on the magazine’s “Top 25 Music Schools 2016,” which is online here and in the Dec. 2 edition of the publication.

The Reporter’s editors, who compiled the list, urge music hopefuls to consider an education with one of the included institutions, noting that “for many, music schools can, at the very least, provide the necessary experience and training to help navigate a particularly cutthroat industry.”

The MTSU listing mentions the plethora of live musical performances presented each year by the university’s School of Music, which collaborates with the Department of Recording Industry on a “music industry” minor concentration that allows students to minor in music-industry entrepreneurship or recording industry.

The Department of Recording Industry, which is part of the College of Media and Entertainment at MTSU, focuses less on live public performances and more on bringing songwriters, producers, engineers and other music-industry experts to campus for public and student discussions and hands-on demonstrations of their craft.

“It was so exciting to learn that MTSU’s recording industry program has made The Hollywood Reporter’s list for the third consecutive year,” said department chair Beverly Keel.

“We’ve worked hard to offer our students a world-class education, and this is validation that we are on the right track. It is such an honor to be included on this prestigious list with schools such as Juilliard, Yale and Columbia.”

The Hollywood Reporter, which regularly ranks entertainment-industry programs at universities around the world for their educational quality and students’ preparedness for jobs, lauded MTSU’s recording industry program in its “Top 25 Music Schools” lists for 2014 and 2015.

Clinton, a 1969 alumnus, is the man behind the music of the “Austin Powers” film series, “Mortal Kombat,” and the second and third “Santa Clause” films, among many. He currently chairs the Film Scoring Department at Boston’s Berklee College of Music, for which he also offers accolades in the list’s No. 8 spot.

Recording industry undergrad majors in the College of Media and Entertainment at MTSU can focus on audio production, commercial songwriting or music business. A Master of Fine Arts degree in recording arts and technologies prepares MTSU graduate students for advanced work in audio production, recording and integrated electronic media.

Almost 20 MTSU alumni or former students and faculty from around the university have been nominated for Grammy Awards in the last five years, and seven have won Grammys so far. The annual Country Music Association Awards regularly include nominations for MTSU-trained professionals, including several repeat contenders.

Nominations for the 59th annual Grammy Awards will be announced Tuesday, Dec. 6. The Grammy ceremony will be held Sunday, Feb. 12, at Los Angeles’ Staples Center.

Natasha Branch, a graduate student working toward her Master of Fine Arts degree in recording arts and technology, adjusts a recording in the MIDI Lab in MTSU’s Bragg Media Building in this November 2015 file photo. MTSU’s recording industry program has been included in The Hollywood Reporter’s “Top 25 Music Schools” list for a third year. (MTSU file photo by Darby Campbell)