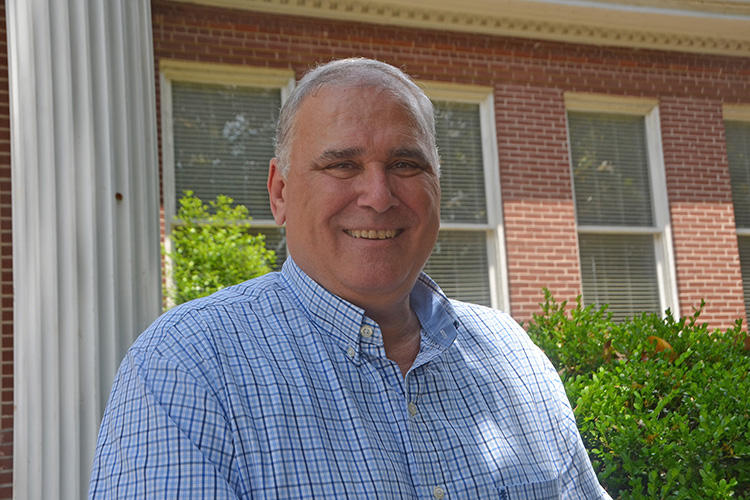 While writing about technology on the MTSU campus keeps Information Technology Division staffer Craig Myers tied to his journalistic roots, his storytelling talents are having an even deeper impact on a war-torn area that remains in the global spotlight.

Myers and a team of missionaries left Wednesday, May 25, headed to Moldova, which borders Ukraine, to help refugees that have fled the war zone. The trip, which lasts until June 6, is in partnership with churches in Moldova and Kingdom Bridges Ministry.

Formerly a journalist in Alabama and Florida, Myers now works at MTSU as an ITD editorial assistant, which he said was a good area to get back into his love of journalism and writing as well as the added benefit of advising students and faculty about new tech available for their use.

Also a master’s student in international relations, Myers plans to use his journalistic skills during the trip and add to his academic work by journaling, conducting interviews with refugees to “let them tell their stories and why they are in Moldova, taking photographs” and “tell the stories of those who are helping as well — why they are doing so much, making sacrifices even from their little.”

Myers, a veteran of mission work in other countries, said he had mixed feelings about this trip because of how Russia’s attack of Ukraine was so unexpected and the fact that the trip was “coming up very quickly.”

“I am excited and a bit nervous because the situation there has been unpredictable, but I am trusting the Lord,” Myers said in the days before his departure. “We have studied these issues in international relations and that is my graduate degree. In February, I was taking a class in international conflict, and it was all about war and NATO (North Atlantic Treaty Organization). Very relevant, but none of the experts thought that this would happen in Ukraine. They thought Russia was going to try negotiations,” he explained.

Myers will be on the mission field with his friend of nearly 30 years, Dr. Andrew Daigle, who will be serving as medical director for the missionary team.

“Daigle and I went to church in Florida when I worked for a newspaper company, but I later moved here to Murfreesboro to start a career,” said Myers, who attends World Outreach Church in Murfreesboro. “My friend moved, too, later, and we have been on mission trips together for a long time. We have been to Moldova, Italy, and he is able to provide medical needs, while I do whatever I can to support him.”

Myers suggested there could be an end to the humanitarian crisis, saying Ukraine had paid a heavy price and lost soldiers in his effort to push back Russian forces. His opinion about solving the crisis has changed.

“These are the things we have studied; we have liberalism theory, which means institutions negotiating for peace that helps in war, while realism states that the countries will act in their own self-interest and do what they think they need to do. What has happened between Ukraine and Russia is they thought negotiation and NATO would work, but realism was needed.

“We could look at (Russian President Vladimir) Putin as crazy, and I do not agree with him, but in his mind, he felt he was acting to defend Russia. I think there is too much faith put in negotiations, where there should have been more realistic preparations to help Ukraine hold Russia (back). A realistic way would have helped the situation if Ukrainians were armed and ready to fight back, or joined NATO earlier, but international relations is unpredictable because of human nature.”

As a Christian, Myers said he believes that human nature is the source of violence. He agrees with the Bible that “human nature is greedy, violent, and sinful; hence their behaviors are very hard to predict. As result of that, we have problems in the world, so to me the answer to that is Jesus. I believe as a Christian, He is the answer to that, the problems of this world.”

But in reaching out to people of different backgrounds and religions as a missionary, Myers said he is just out there to help those who are in need and those helping the needy in return.

“I think we just help whoever needs help, no agenda, no hidden notes, so we don’t discriminate, (and) we also try not to force anyone.”

He reiterated that it was important to not just tell people about God’s love, but also show it.

Myers added, “We have a 20-year-long relationship with the church at Moldova, and when Ukrainians began to evacuate, the people in this church came out to meet them. They put them in vans and took them to their homes and church. Though Moldova is one of the poorest countries in Europe, people were ready to help. So, I want to directly help the refugees and help those who are helping, encourage and support them because they have been helping.”

In this case, the team had been working at the church for over 20 years, and it is a church wanting to grow, serve the community, provide medical care — but this was a more serious trip, he said.

“We want to go now because of the war. (Previously,) it was fun with music, drama for the children. But this one is different. We have more serious purpose to it and to help those who are helping. We have organizations whose goals are to provide service. Right now, is more like an emergency, so next stage would be more of rebuilding, renovating, helping people to get back; we have a mission based on the thing of the moment. We support NGOs (non-governmental organizations) now and we will follow what this church is going to do,” Myers explained.

His team has been accepting donations of medicine, equipment, money, and other supplies so they would have as much as they need.

Myers said his wife, Julie, has been supportive of his missionary work. Their son, Cade, wanted to go on the trip, but Myers said, “it is not the time or kind of trip he wants to go on for a first trip.”

Myers looks forward to returning home and continuing his work and studies at MTSU.

“I love working here at MTSU. I am studying and working here, and I like to take advantage of the university life.”