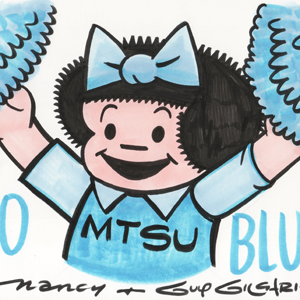 MTSU went worldwide the first week of October, thanks to a beloved comic strip that’s been around since the 1930s and still showing perfect timing during the university’s 2013 Homecoming Week celebration.

“I was on the phone doing an interview with a reporter from the Murfreesboro paper a while ago, and when we got finished, she was asking me about all the different T-shirts that Aunt Fritzi wears and she said, ‘What would it take for her to be wearing MTSU?’” Gilchrist, a Gallatin, Tenn., resident, said Wednesday of his conversation with Daily News Journal reporter Mealand Ragland-Hudgins, an MTSU alumna.

“I said, ‘Do you know I get about a letter a day from somebody asking me about their alma mater, or when somebody’s going to be in, and all the different schools and everything?’

“One night,” Gilchrist continued, “I was working along and I had that blank shirt there to put something on, and I said, ‘Why not MTSU? Won’t it be interesting to see if anybody notices?’ Well, we got noticed.”

More than 100 tweets, including those from MTSU President Sidney A. McPhee, football coach Rick Stockstill and the MTSU Alumni Association, quickly came Gilchrist’s way. He said he expects the tweets, Facebook and other social media attention to continue.

“We go out all over the world,” he said, “but you know how it is with these Blue Raider fans. As soon as somebody sees it, they start spreading it around to all their classmates and alumni and all that.

“I wasn’t paying much attention, I’m drawing and working on the ones for the future, but boy, last night, you guys have really got it going. It’s pretty massive.”

Originally penned by the late Ernie Bushmiller, the comic strip “Nancy” is seen by 57 million readers and printed in more than 400 newspapers in 80 countries as well as the www.gocomics.com website. Gilchrist inherited the strip 16 years ago.

He said the late cartoonist Walter Lantz, creator of Woody the Woodpecker, was his earliest influence. Gilchrist began his craft at an early age, drawing on menus at a restaurant where his mother worked.

Gilchrist said he’s heard about the “Blue Raiders” strip from people from California, upstate New York, Florida — “all over the place, some different countries. Between the Twitter and Facebook and all of that, (MTSU) graduates are everywhere.”

If he didn’t already have a project underway at the Grand Ole Opry this Saturday, Oct. 5, with country music artist Steve Wariner, Gilchrist said he’d be attending the Blue Raiders’ homecoming game at Floyd Stadium against the East Carolina University Pirates.

“I’ll definitely be at a game later this season,” he said, adding that he’s “gotten at least four or five dozen requests to be at tailgating.”

The requests have included enticements of gumbo, brats, ribs, pulled pork — “every kind of food. Blue Raider Nation has been welcoming to me and my family.”

Gilchrist said he has a permanent “Nancy” and painted guitar exhibit at Nashville International Airport that will show through 2015. He also has a partnership with Metro Nashville Public Schools in “Keep Nashville Beautiful” and healthy eating programs.

MTSU and the community will celebrate the first “True Blue Friday” tomorrow, Oct. 4, to encourage as many people as possible to wear blue in support of the university and the Blue Raiders.

True Blue Friday is the first event stemming from the True Blue Community Initiative, a grassroots effort launched in September to bolster community support for Blue Raider academics and athletics. You can learn more about the initiative at http://mtsunews.com/true-blue-community-initiative.

Tickets are still available for Saturday’s game, and there’s a full schedule of Homecoming 2013 events — and a printable poster — at http://mtsunews.com/mtsu-homecoming-2013-events.