Two recent graduates of MTSU’s adult degree completion program just so happen to find themselves as colleagues in one of the state’s biggest fire departments.

Both Alana Brown and Ann Dashiell graduated with MTSU degrees in 2009 and 2014 respectively. Brown’s degree is in organizational leadership, a Professional Studies Program concentration, while Dashiell completed her degree in liberal studies. 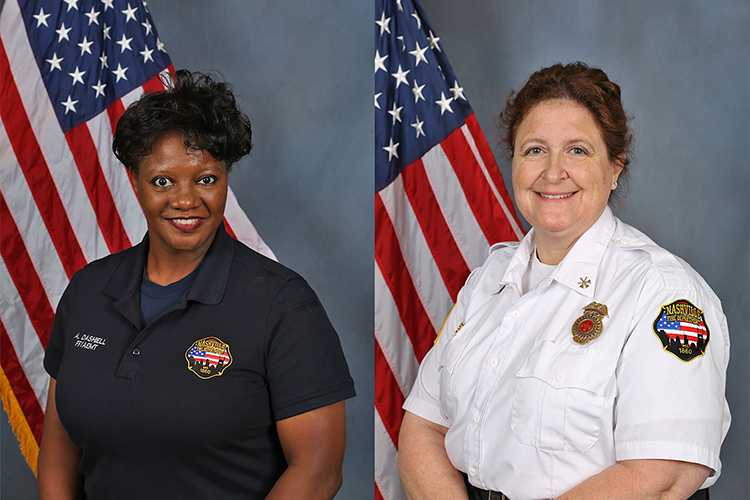 Nashville Fire Department employees Ann Dashiell, left, and Alana Brown, right, graduated with MTSU degrees in 2009 and 2014 respectively through the university’s Adult Degree Completion Program. Brown’s degree is in organizational leadership, while Dashiell completed her degree in liberal studies. Together, they have more than 42 years of service at the department, where Dashiell serves as chaplain and Brown as an EMS district chief. (Photos courtesy of the Nashville Fire Department)

Together, Dashiell and Brown bring more than 42 years of service to the Nashville Fire Department. Dashiell serves as the department’s chaplain, and Brown is an EMS district chief.

Brown, 54, was promoted to her current position while she was finishing up her degree.

“I have two sons, who have both chosen MTSU for their bachelor’s degree programs,” said Brown, a Mt. Juliet resident. “I wanted to provide them with a strong role model and show them that hard work toward a goal pays off.”

The 49-year-old Dashiell was also motivated by her family as well as wanting to motivate others to believe they could also finish what they started. She’s a good example, too, because she stays very busy. On top of her duties with the NFD, she is active in her church as a youth minister. Balancing everything was tough at times, she said, especially with a profession that is not a typical “9-to-5.”

“It was a major adjustment,” said Dashiell, a 15-year employee of the NFD. “But well worth the personal investment. I enjoy the structure of deadlines, completing work and being intellectually challenged.”

It had been several years since either had attended a college class when each of them enrolled. Brown last attended college in 2001 while nine months pregnant. Like Dashiell, she had to be organized and put assignments on her calendar just like she would with doctor’s appointments and other commitments. Being organized is the first piece of advice she said she would give to other adult students considering going back to school.

The second most important thing, Brown said, was not taking on more than you can handle.

“If you can only take one class per semester due to life – family responsibilities, job responsibilities, financial reasons – just take the one class,” she said. “Keep going. Start slow and get used to the pace you are going to have to function at during that semester. Not everyone in college is fresh out of high school. You will have plenty of classmates you can relate to during class time.”

Both also urged adult learners to embrace their new MTSU community. While Brown’s sons certainly played a role in her doing that, Dashiell says it was a wonderful feeling to be a part of something bigger than herself.

If you are interested in finishing your degree, MTSU can help. With multiple degrees that are offered fully online, there are flexible options to fit even the busiest of schedules. Call 615-494-7714 or visit MTSU.edu/FinishNow for more information on how to get started and how you can get credit for what you already know.