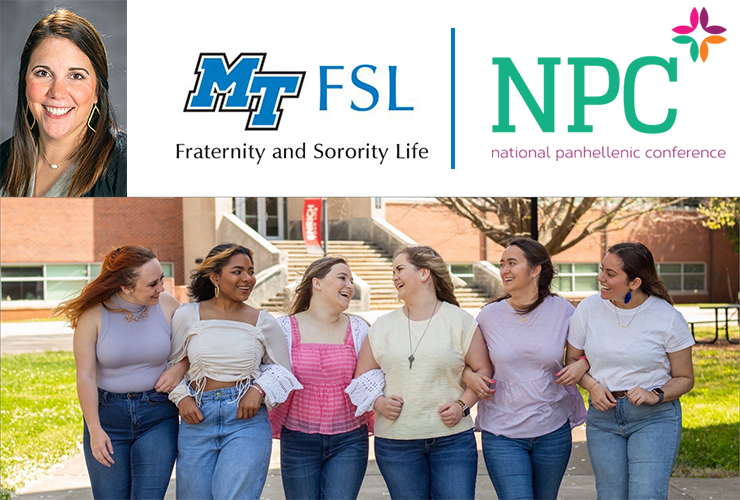 Middle Tennessee State University was among a select group of institutions recognized for excellence by the National Panhellenic Conference, the largest advocacy and support organization for the women’s sorority experience.

Headquartered near Indianapolis, the conference earlier this fall announced the recipients of the 2021-22 College Panhellenic Association Awards to recognize their accomplishments in Panhellenic operations and work to support the women’s-only sorority experience during 2021-22.

College Panhellenic Associations were eligible to receive recognition for their work in academic innovation, community impact, judicial procedure, leadership, marketing, programming and recruitment. Additionally, to receive an Excellence Award, the College Panhellenic must demonstrate a set of Panhellenic core competencies, such as adhering to NPC Unanimous Agreements and policies, meeting deadlines for dues and reports and keeping NPC’s information and contacts database up to date.

“NPC awarding this prestigious honor to the MTSU College Panhellenic recognizes the hard work of the past two executive boards and the hundreds of members who comprise the College Panhellenic at MTSU,” Merritt said. “As the director of Fraternity and Sorority Life, I am proud of the diligent efforts that the CPH sorority women have made in providing a worthwhile sisterhood experience to their members, excelling in all Panhellenic operational areas, and providing opportunities for members to grow personally.”

About the National Panhellenic Conference

NPC, the largest organization advocating for the women’s-only sorority experience, is the trade association for 26 national and international sororities. NPC sororities are located on nearly 670 campuses with more than 375,000 undergraduate members in more than 3,350 chapters. Alumnae are represented in nearly 3,500 associations throughout the world. For more information, including a complete list of NPC sororities, visit npcwomen.org.