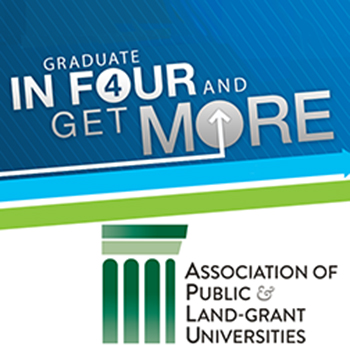 Less than two years after the initiation of its Quest for Student Success initiative, MTSU is in the running for a top national award for its efforts.

Click on the graphic for more details on MTSU’s “Quest for Student Success” project.

The Association of Public and Land-grant Universities has selected MTSU as one of the five finalists for its APLU Project Degree Completion Award.

“This … is really recognition by a professional association in a very competitive environment,” said Dr. Richard Sluder, vice provost for student success.

“We’re in stiff competition with schools that have been doing this for a lot longer than MTSU.”

The award will be presented at APLU’s annual meeting, which is scheduled for Nov. 15-17 in Indianapolis, Indiana.

In submitting data to APLU for consideration, Dr. Cornelia Wills, director of the MTSU Office of Student Success, cited:

Sluder also hailed MTSU’s increase in academic advisors, now numbering 87 campuswide, and the expenditure of more than $200,000 last year on tutoring, which made free tutoring available for 165 courses, as contributing factors.

The award is an aspect of Project Degree Completion, a project developed by APLU and the American Association of State Colleges and Universities.

Nearly 500 public institutions, including MTSU, have pledged to award a total of 3.8 million more degrees by 2025.

For more information, contact Sluder at 615-898-2324 or richard.sluder@mtsu.edu. To learn more about the APLU Project Degree Completion Project, go to www.aplu.org.