MTSU ALERT: The threat no longer appears to exist on campus, and it is safe to resume normal activities. The investigation remains active. Please report any suspicious activity to MTSU Police at 615-898-2424
Click here for information and updates about the University’s response to COVID-19.
MTSU

Thrifting: Why You Should + Wh.. 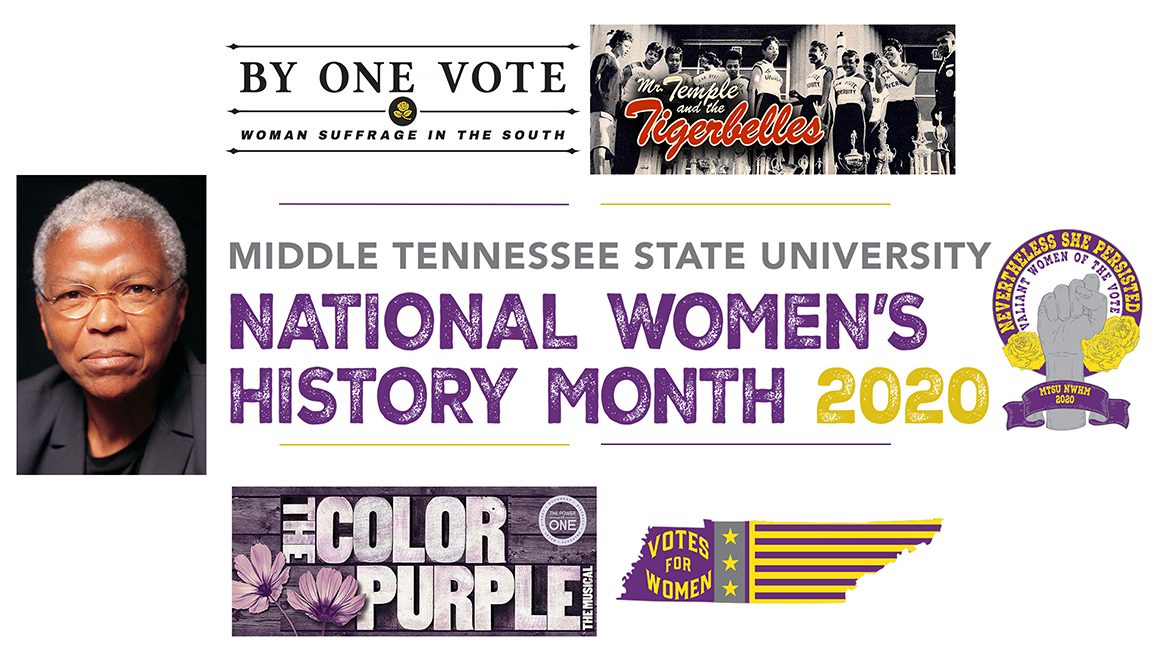 MTSU’s observance of National Women’s History Month will be an appreciation of nearly 100 years of American women’s suffrage. 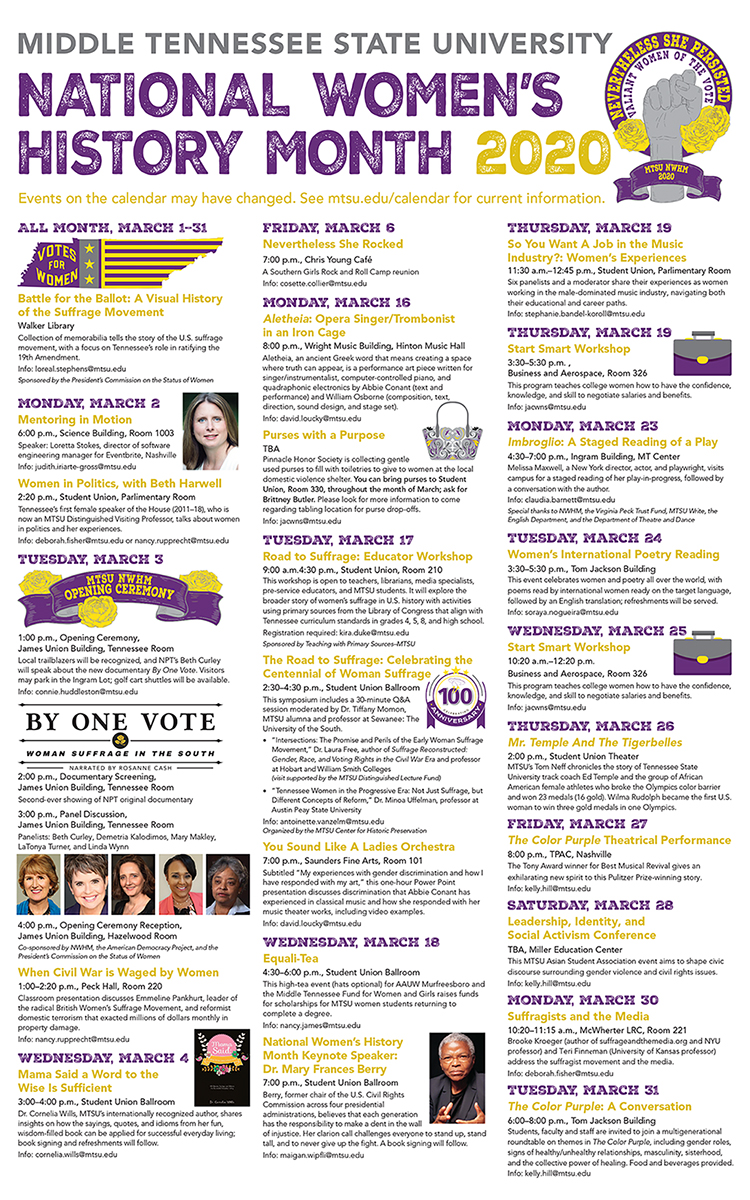 Click the image to see a larger PDF version.

“Nevertheless She Persisted: Valiant Women of the Vote” is the theme of the university’s 2020 celebration of women’s history as multiple events mark the passage of the 19th Amendment to the United States Constitution.

“The right of citizens of the United States to vote shall not be denied or abridged by the United States or by any state on account of sex. Congress shall have the power to enforce this article by appropriate legislation.”

Berry, a Nashville native, is the Geraldine R. Segal Professor of American Social Thought and a professor of history at the University of Pennsylvania. She will conduct a book signing following her speech.

The complete calendar of MTSU National Women’s History Month events is available in a PDF version here or by clicking the poster above. Some of the featured events include:

• The official opening ceremony will take place at 1 p.m. Tuesday, March 3, in the Tennessee Room of the James Union Building.

A select group of women “trailblazers” from among MTSU’s faculty, staff, students and alumnae will be honored at the event, which will be followed by a 4 p.m. opening-ceremony reception in the Tennessee Room.

• Beth Curley, president emerita of Nashville Public Television, will introduce the documentary “By One Vote: Woman Suffrage in the South,” which is slated for 2 p.m. March 3 in the Tennessee Room.

Country singer Rosanne Cash narrates the film, an original NPT production that premiered in November 2019 and is being shown for only the second time ever.

• The first female speaker of the Tennessee House of Representatives, Beth Harwell, will talk about “Women in Politics” at 2:20 p.m. Monday, March 2, in the Parliamentary Room of the Student Union.

Harwell, who served as speaker from 2011 to 2018, is now an MTSU Distinguished Visiting Professor.

The event is open to teachers, librarians, media specialists, pre-service educators and MTSU students and will focus on using primary sources from the Library of Congress to teach students in fourth, fifth and eighth grades and high school students about women’s suffrage.

• “The Road to Suffrage: Celebrating the Centennial of Women Suffrage” symposium will take place from 2:30 to 4:30 p.m. March 17 in the Student Union Ballroom.

After presentations on the early women’s suffrage movement and women in the Progressive Era, MTSU public history alumna Dr. Tiffany Momon, a visiting professor of history at Sewanee: The University of the South, will moderate a 30-minute Q&A session.

• A display chronicling women’s fight for the right to vote will be on display March 1-31 on the first floor of the James E. Walker Library.

“Battle for the Ballot: A Visual History of the Suffrage Movement” will include memorabilia emphasizing Tennessee’s pivotal role in the approval of the 19th Amendment.

In addition to the Women’s History Month Committee and the June Anderson Center, event sponsors and supporters include the President’s Commission on the Status of Women, the American Democracy Project, Teaching with Primary Sources, the Center for Historic Preservation at MTSU, the Department of Theatre and Dance, the Murfreesboro branch of the American Association of University Women, Youth Empowerment through Arts and Humanities, the Virginia Peck Fund, MTSU Write, the Department of English, the MTSU Asian Student Association, Student Programming and Raider Entertainment, and the MTSU Pinnacle Honor Society.