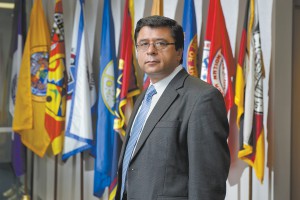 Tribal Quest: Economic researcher Murat Arik, who is documenting Native American health nationwide, stands in front of the flags of all USET member tribes in the lobby of USET’s headquarters building in Nashville.

When the United South and Eastern Tribes Inc. (USET) wanted to learn the true cost of providing health care to members of 26 American Indian tribes in 12 states—and whether adequate resources were being allocated—they turned to Dr. Murat Arik, associate director of MTSU’s Business and Economic Research Center (BERC).

Meanwhile, Dr. Jo Edwards and researchers at the University’s Center for Health and Human Services (which Edwards directs) were asked to craft culturally appropriate communications to assist USET in confronting an epidemic of diabetes among members of its tribes.

“We went to Dr. Arik and BERC because of the outstanding work they do in economic analysis,” says John Mosely Hayes, senior epidemiologist at the USET Tribal Epidemiology Center. He noted that this latest collaboration builds on a longstanding relationship between Nashville-based USET, a nonprofit intertribal organization, and the University.

Knowing the true cost of providing services is crucial since that can tell officials whether resources are being directed where they can do the most good—toward preventive care for diabetes, for example. But that information is hard to determine, Hayes says.

When American Indians and Alaska Natives receive health services in the federal Indian Health Service (IHS) system, a bill for each procedure or test is not presented the way it is in the private insurance industry. Instead, the cost is covered by a fixed budget, similar in setup to the military’s health care system.

A complex process of tribal negotiations and formulas are applied to determine how much federal funding each tribe’s independently operated health delivery system receives. Many tribes supplement that with their own government funding, although there are vast differences in the tribes’ financial resources. Complicating matters even further, USET’s member tribes are spread across a wide geographic area and have wide array of health concerns.

“The study will provide useful information by clearly showing tribal health care delivery system costs, including treating diabetes,” Hayes says. “We hope the study will help define a standardized methodology for costing out each [tribe’s] system.”

Now two years into the project, Arik is reviewing eight million “patient encounters”  within the IHS electronic patient record management system, some of which involve multiple procedures or visits to a doctor. All the work is being done within strict guidelines that protect patient confidentiality.

“You don’t know how much the services you are providing actually cost. That information will help them plan for the future,” Arik says. “These questions are also valid in the private sector. What are the costs of controlling diabetes versus uncontrolled diabetes? If it’s significant, the argument is you need preventive care.”

There’s a reason diabetes comes up in conversations with Hayes and Arik. According to Hayes, the disease is at epidemic levels among American Indians and Alaska Natives. A 2010 study found that 59 percent of that population age 65 and up in the IHS Nashville Area (a 12-state region) had diabetes, compared with 25 percent of people 60 and older in the general population.

That’s why USET asked Edwards to assist its staff in developing culturally appropriate messages about the importance of preventing and controlling diabetes.

Edwards’s team tailored messages for physicians, clinic managers, and others with an eye toward providing useful information “so there aren’t going to be volumes of data that sit on a shelf,” she says. “They wanted us to look at the data from the perspective of those individuals and how they might use it. It was a very interesting project.”

BERC’s study has taken on new urgency with the passage of President Obama’s health care reform legislation and a federal court ruling in Florida that could, if upheld, strike down the law as unconstitutional.

The health care reforms include permanent reauthorization of the Indian Health Care Improvement Act. A wide range of tribes and tribal organizations have expressed concern that if the courts throw out health reform, the act could be lost, as well. A total of 349 tribes have filed a friend of the court brief arguing that Indian-specific provisions are legally separate from the rest of the health reform law.

USET president Brian Patterson said that the group signed on to the brief because “it is critical that Indian country unite to preserve the Indian Health Care Improvement Act amendments.” He noted that it took several years of dedication and leadership to get the legislation passed. “It would be a major setback for the overall health and well-being of Indian country if they were struck down.”

Arik’s study will provide information that should help the tribes make that argument, and Arik is working diligently to make sure every detail is exactly right.

“Some people call me a perfectionist, [with my] need to understand all issues,” he says. “I call myself a lifelong learner.”