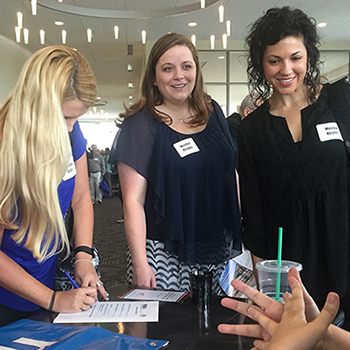 Newly hired MTSU faculty members have received their introduction to the offices and departments that will serve them as the start of the 2015-16 academic year approaches.

More than 70 new faculty members were invited to the second floor of the Student Union Tuesday, Aug. 18, where they visited table after table of fellow employees armed with information to help them navigate the university infrastructure.

Four of MTSU’s newest faculty members take a moment to learn more about getting publicity for their students’ work and their own during New Faculty Orientation Day Tuesday, Aug. 18, in the lobby outside the Student Union ballroom. Dr. Heather Rhodes, center, a new full-time member of the Department of Economics and Finance, and professor Meena Khalili, center right, a new addition to the Department of Art, listen to News and Media Relations staffer Gina K. Logue, right, explain how their expertise can be used in public relations. New Jones College of Business faculty member Lucy Matthews, left, an assistant professor of marketing, joins new aerospace professor Christina Hiers, center left, in filling out contact information for future media questions. (MTSU photo by News and Media Relations)

The event continued today, Aug. 19, with a series of briefings from university President Sidney A. McPhee and representatives from seven of MTSU’s nine colleges about available faculty services, followed by special faculty meetings among the colleges.

“We are very pleased to have such an impressive, diverse and enthusiastic group of new faculty members this year,” said Dr. Newtona “Tina” Johnson, interim vice provost for academic affairs.

Some of the newcomers shared their visions for assisting students when they enter MTSU classrooms for the first time.

“I’m working on a version of ‘Uncle Vanya’ that I think will be a little bit more accessible,” said Halena Kays, a new assistant professor of theatre, referring to the classic play by Anton Chekhov.

Kevin Krahenbuhl, a new assistant professor in the Womack Department of Educational Leadership, said he’ll focus on the relationship between teaching and learning with an emphasis on cognitive science —understanding how the brain functions in communicating and processing information.

“Based on the number of new faculty that attended this morning’s very successful new faculty orientation, I believe our academic departments and colleges have recruited an energetic and committed group of educators,” said Johnson.

“I wish our new colleagues the best as they embark in their professional journey at MTSU.”

Some of the personnel assisting new faculty included staffers from the Center for Educational Media, University Police Department, the Office of News and Media Relations, the James E. Walker Library, Creative and Visual Services, and the Office of the Provost.