MTSU’s College of Liberal Arts adds 3 to community board 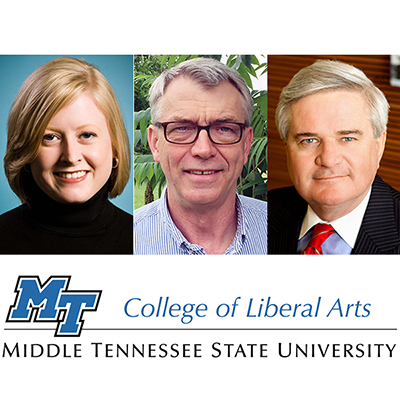 MTSU’s College of Liberal Arts has added three new members — all university alumni — to its community advisory board.

The Friends of Liberal Arts Board cultivates and maintains relationships with community, state and national leaders; promotes the achievements of MTSU’s liberal arts faculty and students as well as overall public image; exposes students to various career options; serves as mentors to those students; and helps pursue external funding.

A native of Minnesota, Backlund earned his Bachelor of Arts in English and Humanities at the University of Minnesota before joining the National Park Service as an aide at Cumberland Gap National Historic Park and working at Mammoth Cave, Glacier National Park and Cape Hatteras. He earned his master’s degree in history at MTSU, focusing on the Cold War and Mission 66, a 10-year program to improve the National Park Service that was completed in 1966, and is an adjunct professor of history at MTSU.

During his 33-year legal career, Dagley has specialized in high-stakes litigation involving many different industries. He’s most recently worked on behalf of hospital and health care systems with software failures and has defended numerous Nashville health care companies on contractual disputes as well as advising on health care fraud, False Claims Act matters and government investigations.

The College of Liberal Arts at MTSU comprises 10 departments with more than 300 faculty members and 2,800 students majoring in fields that encompass the arts, humanities and social sciences to earn bachelor’s, master’s and doctoral degrees. MTSU’s General Education Program also is chiefly located within the college, so almost every student who attends MTSU will have a liberal arts class.

In addition to the academic departments, MTSU’s College of Liberal Arts houses several nationally recognized organizations, including The Center for Historic Preservation, the Albert Gore Research Center, the University Writing Center, the Governor’s School for the Arts and the Forensic Institute for Research and Education.

For more information about the College of Liberal Arts at MTSU, please visit www.mtsu.edu/liberalarts.