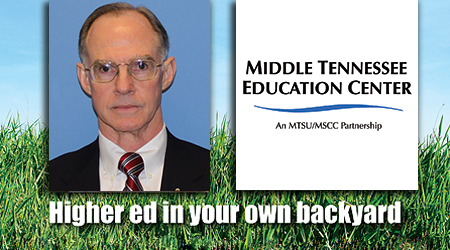 SHELBYVILLE — The new coordinator of the Middle Tennessee Education Center in Shelbyville is spreading the good news.

Shelbyville native Wayne Dillingham, who took over Feb. 1, says he will talk to anyone and everyone about the college courses offered through the partnership between MTSU and Motlow State Community College.

“I want to bring a new level of enthusiasm and excitement to the programs here,” Dillingham says. “I want to make sure that the people of Bedford County and the surrounding counties know about MTEC and the potential we have to do good things for the community.”

The center was created in 2010 to offer more affordable and accessible higher-education opportunities to people in southern Middle Tennessee, particularly those in Bedford, Marshall, Moore, Coffee, Lincoln and Maury counties.

“We are very excited to have Wayne Dillingham managing day-to-day operations at the MTEC campus,” said Mike Boyle, dean of the University College at MTSU. “His expertise, training, and obvious devotion to Bedford County and the surrounding area make him a perfect fit as we work to bring more programs to the area.”

“Maybe these are students who are qualified and capable of going to college but never realized that college was within their grasp,” says Dillingham.

Older adults who either never enrolled in college or started but never obtained a degree also may find MTEC a convenient asset to their midlife career-change plans.

“They may be farther along the road to a college degree than they ever dreamed by getting college credit for their life experiences,” Dillingham says.

Dillingham, 60, brings a unique skill set to his new job. After graduating with a bachelor’s degree in business administration from Auburn University in 1975, he served a stint in the U.S. Marine Corps, flying an A-6 Intruder from 1975 to 1980.

Upon re-entering civilian life, Dillingham obtained a law degree from the University of Tennessee in 1983 and practiced for two years with the Houston-based firm of Fulbright & Jaworski.

He put his legal abilities to work as an attorney for the U.S. Air Force from 1985 to 2005, retiring as a colonel. From 2005 to 2010, Dillingham worked as an assistant general counsel at the Federal Bureau of Investigation in Washington, D.C.

After all that traveling, Dillingham emphasizes he’s a Shelbyvillian at heart: a proud graduate of Shelbyville Central High School and a devoted Blue Raider sports fan. He says one of his goals for the future is to expand MTEC’s reach.

“I really believe that, at some point in time, we will be able to say that students can start their college degree right here in Bedford County and continue on and get that four-year MTSU bachelor’s degree never having left Bedford County,” says Dillingham.

The Middle Tennessee Education Center is located at 200 Dover St. in Shelbyville. For more information, call 931-685-4444 or go to www.mteducationcenter.com.