A challenge at the best of times, the newest MTSU police officers are attending the Tennessee Law Enforcement Training Academy with the addition of strict COVID safety rules as the department continues seeking qualified candidates for open positions.

Cody Choate, a Lascassas native and recruit officer whom MTSU hired in October 2020, shared some of the COVID protocols implemented at the academy, which officer candidates are required to attend and graduate from in order to meet the Tennessee Peace Officer Standards and Training Commission’s criteria for being a certified law enforcement officer.

“First thing every morning when we wake up, we get screened, we check (our) temperatures, and go through if anybody has any symptoms,” Choate said. “We always wear a mask, unless we’re running, but normally when we’re running, we’re spaced out. We carry hand sanitizer. It’s an essential item that we always have on our person at all times. In the classrooms, we’re spread out. There’s a couple seats in between each officer.” 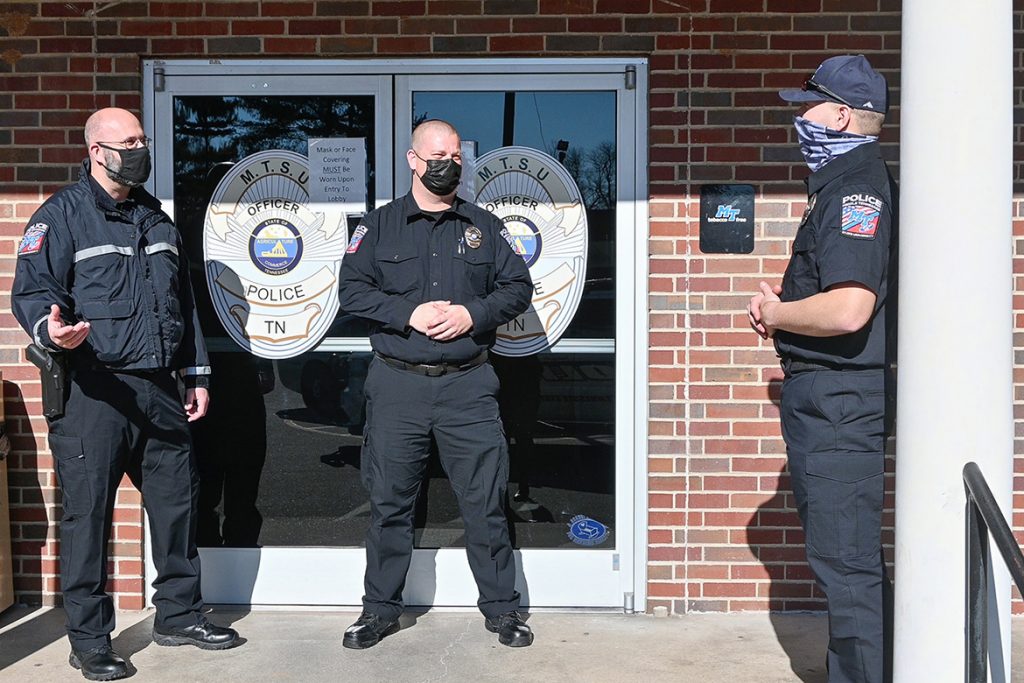 Erik Libby, a Florida native and another recruit officer hired by MTSU in October 2020, started the academy with Choate in January and reiterated the safety protocols, such as the now ubiquitous six feet of social distancing.

“We had to be tested for COVID prior to beginning the academy. If any one of us attending the academy show any symptoms, such as a fever, we will be sent home and quarantined. This could potentially cause us to have to repeat the academy,” he said.

“In addition, all people who share a room with anyone experiencing symptoms will also be sent home. So … I am keeping my fingers crossed that adhering to the safety protocols will prevent any one of us from getting sick!” 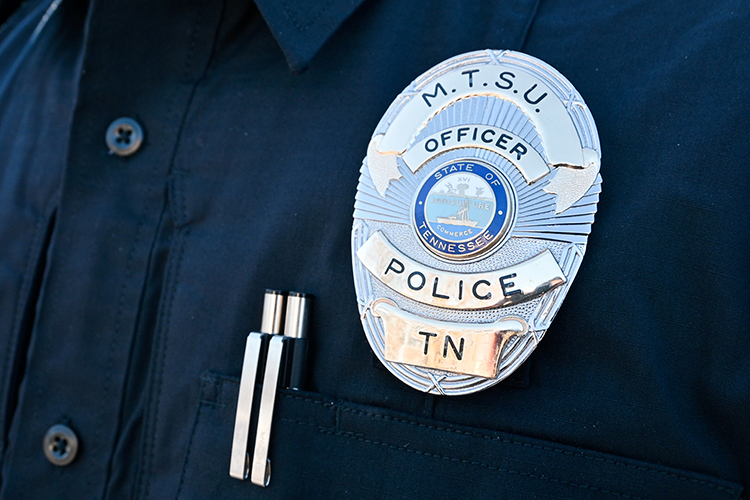 The badge of Cody Choate, Middle Tennessee State University Police recruit officer, featuring the state of Tennessee seal is shown in this Jan. 22, 2021, photo on the MTSU campus. (MTSU photo by Stephanie Barrette)

The academy is located in Nashville off Lebanon Pike. The Basic Police School course consists of 12 weeks of training and assessment in law, ethics, physical fitness and professional law enforcement standards.

Officer recruits live on campus during the week from Sunday night to Thursday afternoon and share meals and dormitory rooms with their fellow recruits, said Jason Hurley, MTSU training sergeant.

Days break down into a mixture of physical training and academic classes. Physical training begins before 6 a.m. every morning and can last from a single hour up to 10 hours a day during activity week, explained Ryan Durham, a Columbia, Tennessee, native and MTSU police officer who graduated from the academy in December.

In addition, recruits attend multiple hours of class daily — some ending as late as 10 p.m. — complete chores and sometimes have even more physical training at night, Libby said.

“The physical part was stressful, but the mental aspect of being away from home all week and trying to take in everything they are teaching you, it felt like drinking from a fire hose sometimes,” Durham said.

“I would have to say the toughest part, for me, is the intense physical training,” said Libby, who is currently attending the academy. “However, it has already done a lot to increase my fitness and physical endurance. I improve with every workout session, and I’m impressed with my progress so far.”

“It’s definitely a challenge,” Durham said, “but if you really want to be in this career, nothing is going to stop you, especially the academy. It’s three months long, but when you compare three months to decades of a future career, it’s nothing you can’t handle.” 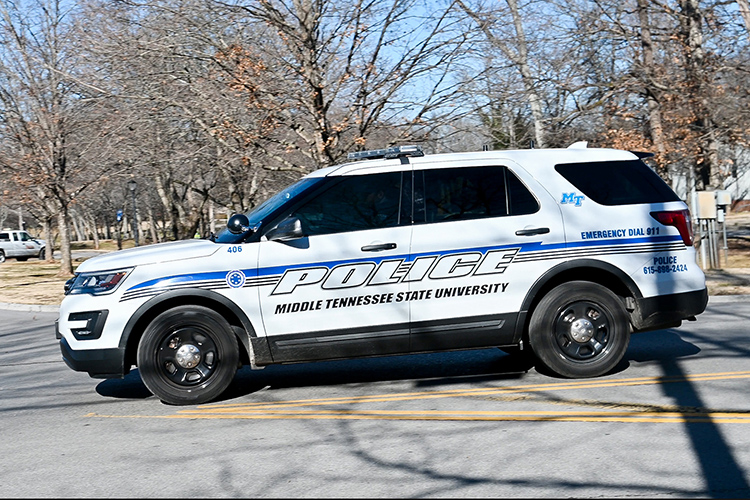 ‘A great place to connect’

The smaller size, training opportunities and other features of MTSU attracted officers to the campus police environment.

“The opportunity to work in such a unique environment was a little too good to pass up,” Durham said. “The department trains in a variety of things very frequently as well. Given the current climate between police and so many people, this is a great place to connect in a positive way to young adults and help bridge that gap.” 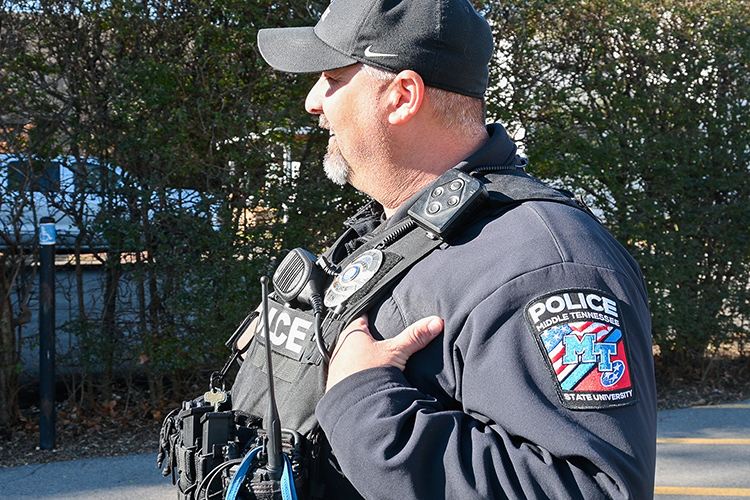 Libby was drawn by the smaller size of the university department, which has 33 available positions compared to the Murfreesboro Police Department with 300 positions.

“In a smaller department you’re able to get to know everyone you work with, and it’s almost a family-type atmosphere. Since the department is in Murfreesboro where I live, I don’t have a long commute, which is great! I am very intrigued by the university aspect of the department, which makes it unique, compared to a municipal or county law enforcement agency.”

“I choose MTSU is because it’s a great community. They got back to me very fast, and … their reputation is very good,” Choate said.

Led by Chief Buddy Peaster, the MTSU police department has also implemented its own COVID-safety protocols since the pandemic began last year.

“Right now, we are taking and logging our temperature at the start of every shift,” Durham said. “We are also doing our best to social distance while around each other, and we are wearing masks when we go into campus buildings. Most of us also carry hand sanitizer. A lot of us have … had the opportunity to receive one of the new COVID vaccines.”

Currently, 18 of the MTSU police department staff have taken the vaccine, Peaster said. 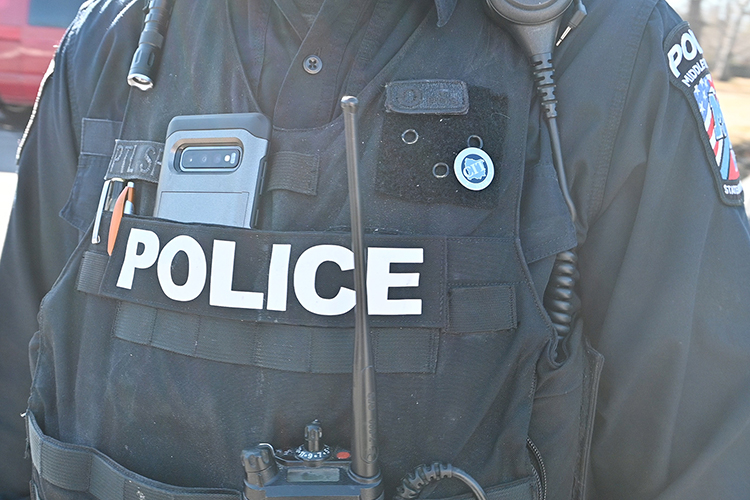 This closeup photo of Middle Tennessee State University Police patrol specialist Leroy Carter’s uniform shows he is geared up for his shift to serve the campus community on Jan. 22, 2021. (MTSU photo by Stephanie Barrette)