The 2014-15 Student Government Association president at MTSU spent all summer learning the ropes while taking classes, and he says the most important thing he learned was how to prioritize. His most important priority is communication.

“I’m the liaison between 20,000-plus students, faculty and administration,” says the marketing major from Nashville.

To help extend his reach, George intends to call on his fellow elected officials in SGA.

“I want to empower the (SGA) senate to be out there even more, just have more of an established presence,” George says.

He wants the student senators to take the initiative and to explain who they are both in and out of the classroom, even when they’re not wearing their specially designed polo shirts.

George credits his executive team with helping to understand the SGA budget, which he puts at about $126,000 for the academic year, subject to oversight from the Office of Student Affairs.

“It took a lot of time,” George says. “You want to be fair with everyone in a budget, but at the same time, you’ve got to work with what you’ve got.”

The top issues on George’s agenda include addressing the ever-present concerns about parking and reassuring students that the MTSU advisers newly hired to help them guide their degree tracks will be effective.

SGA also has a role to play in increasing student retention and graduation rates at MTSU, George says.

“Most students are mentors for students by providing private tutor sessions, working open tutor sessions on campus and just being there for someone going through a rough patch in their life,” George explains. 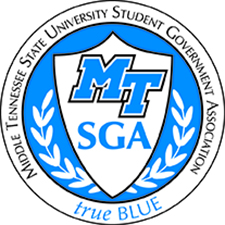 “These students have the ability to change another student’s perspective about becoming involved in organizations and completing college.”

George admits that he was not heavily involved in university life when he was a freshman Joining organizations, however, helped turned around his entire student career.

“I saw myself transform into something I never thought I’d be as a freshman,” George says.

George got a jump-start on his marketing career by starting his own T-shirt business two years ago. He’s heavily influenced by “street wear” culture, a blend of West Coast skateboarding styles that includes fitted pants, screen-printed large T-shirts and flat-billed hats.

A member of Alpha Tau Omega fraternity, George has a younger sister and a younger brother. His father works at St. Thomas Hospital in Nashville, and his mother is a secretary for Lt. Gov. Ron Ramsey.

For more information on Student Government Association activities, contact George at sgapres@mtsu.edu or call the SGA office at 615-898-2464.