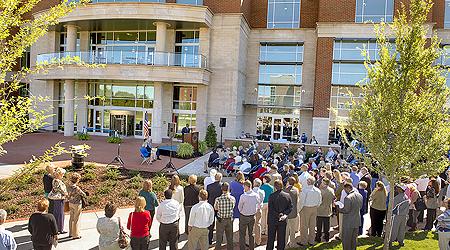 Past and present MTSU leaders, alumni and friends of the university joined students Sept. 19 in christening the new $65 million Student Union Building.

Student Government Association President Coby Sherlock called it “a monumental day and a huge step for MTSU,” while referring to the nearly 211,000- square-foot building as a “monumental resource.”

“Architecturally, it’s beautiful,” MTSU President Sidney A. McPhee said. “It’s designed to be home for students. It’s meant to be lived in, and they are doing that.”

The three-story building, which opened Aug. 24 when students returned to begin the fall 2012 semester, is a long-awaited replacement for the 45-year-old Keathley University Center. The KUC remains an open and functioning facility.

“I have never been more proud of our students,” said Sells, the vice president of student affairs and vice provost for enrollment and academic services.

Sells said it was the vision of former vice president of student affairs Dr. Bob Glenn, who attended along with his wife, Laurie; the determination of former SGA students Spencer Wood and Jay Cash; and an editorial in the student publication Sidelines that propelled the project from paper to reality.

“Students had to pay for this,” Sells said. “They agreed to make the down payment on the future, and they knew they would not benefit from it.”

The Glenns drove from Athens, Ala., where he serves as president of Athens State University. Representatives from the Tennessee Board of Regents and the various engineering, architectural and construction firms involved in the project, and distinguished past presidents of the student body, were in attendance.

The building features Phillips Bookstore, restaurants, an 840-seat ballroom, 95-seat theater, student government parliamentary room, third-floor offices for the SGA, Student Unions and Programming and Center for Student Involvement and Leadership, lounge areas that include collaborative technology. You can watch a brief video of the event below.