Middle Tennessee State University continues developing financial incentives to attract new students to its Blue Raider family, the latest being a new guaranteed scholarship that may hold the key to helping some students earn their degrees.

MTSU President Sidney A. McPhee brought the breaking news to guests attending the recent kickoff for the 2019 True Blue Tour student recruiting event in Murfreesboro — information he will share at the 13 remaining cities the university will visit as well. 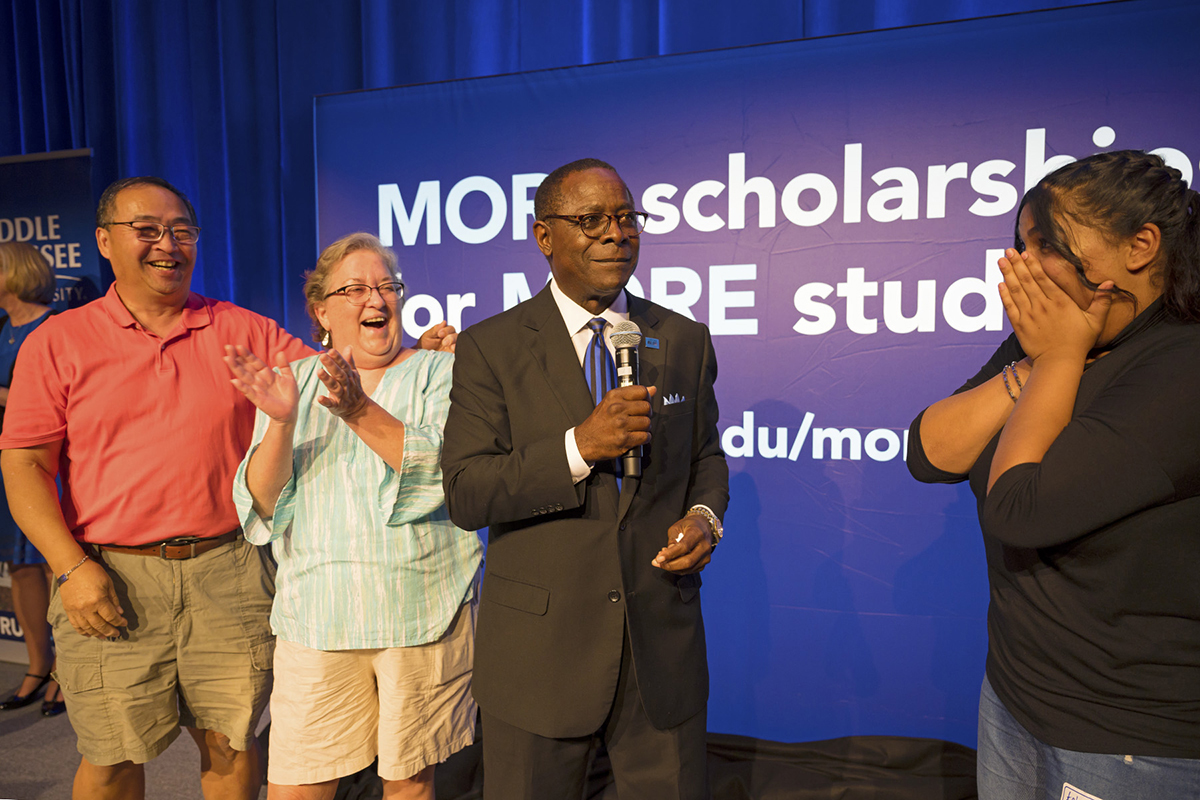 Prospective MTSU student Aelmira Esmaeilpour, right reacts with surprise after MTSU President Sidney A. McPhee presented her with a Blue Raider Scholarship during the fall 2019 True Blue Tour kickoff event Aug. 21 in the Student Union Ballroom. McPhee unveiled a new True Blue Scholarship as an added incentive available in fall 2020 for students with a 3.5 minimum GPA and with an ACT score of 23 or 24. (MTSU photo by Cat Murphy)

McPhee’s announcement came a year after he revealed the university’s new Presidential Scholarship — $4,500 a year for four years, or $18,000 total, for qualifying students with a minimum 3.5 GPA and ACT score between 25 and 29 — which is the largest guaranteed scholarship of its kind awarded in Tennessee.

“This is the kind of news I love to break,” McPhee told the crowd in the Student Union Ballroom during the admissions tour event, where MTSU personnel met hundreds of prospective students and their parents. “For many of you, it will mean more money in your pockets.

“Let me be clear,” he continued, referring to potential True Blue Scholarship recipients. “These are exceptional students who proved they could succeed in high school academics. At an ACT of 23 or 24, they are above the MTSU all-freshman ACT average. We are so happy they are considering MTSU. That’s why we want to sweeten the deal with this new award.”

The president told the enthusiastic crowd from Rutherford and surrounding counties that, when combined with their funds from the Hope Lottery Scholarship, “it means these students will be attending MTSU for less than 50 percent of our tuition rate.” 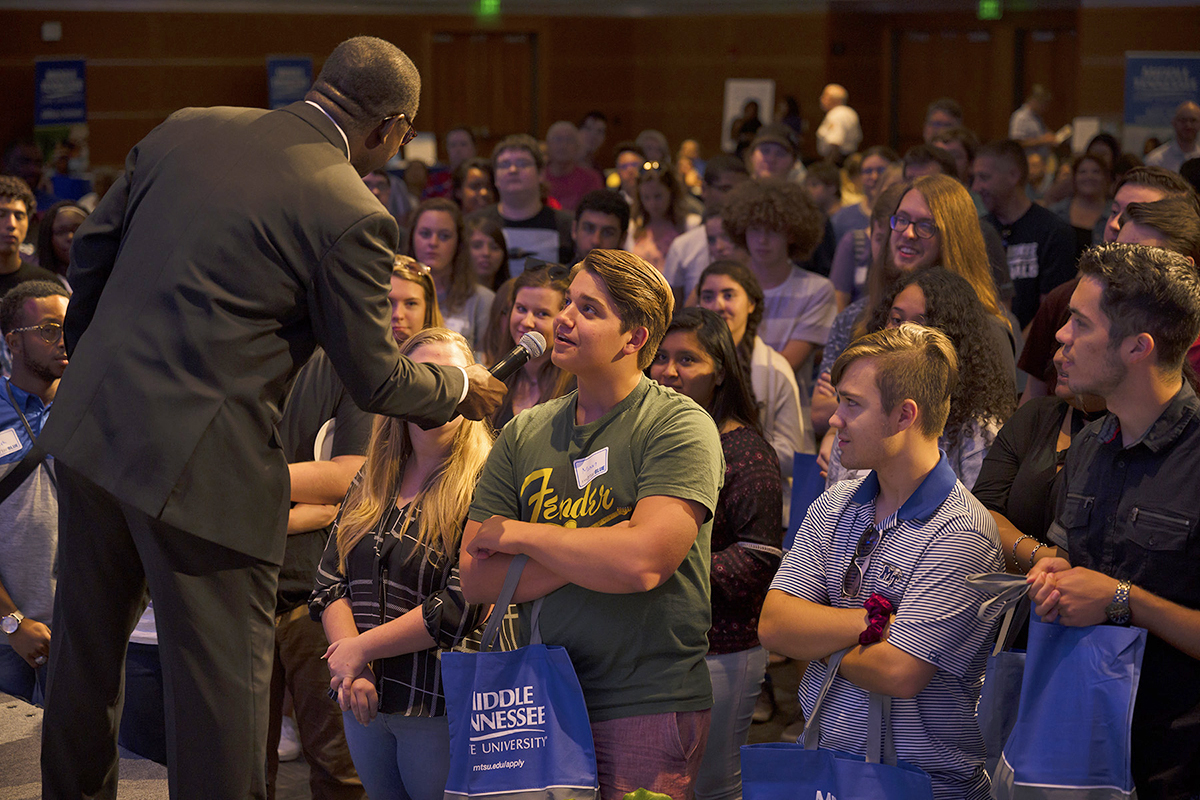 MTSU President Sidney A. McPhee learns about a prospective student’s interest in coming to MTSU during the recent fall 2019 True Blue Tour kickoff event in the Student Union Ballroom. Rutherford County was the first stop on the 14-city tour, and the president announced a new scholarship incentive. (MTSU photo by Cat Murphy)

“We are one of the few universities that offer guaranteed academic scholarships for these excellent students scoring in this range of the ACT,” McPhee added. “And we are making this investment in the True Blue Scholarship because we are confident that this boost, combined with the Hope (scholarship), makes MTSU an even greater value.”

Prospective students must apply by Dec. 1 to be considered for these and other scholarships.

Rutherford County True Blue Tour attendee Jaia Peterson, 17, a Blackman High School senior, qualifies for a Trustees Scholarship, which provides a student with $5,000 a year for four years. She said the scholarship “means not having such a difficult time paying for college.”

While undecided but leaning toward political science, she plans to follow in the footsteps of her sister, Paige Peterson, a member of MTSU’s Class of 2019 majoring in psychology, and her brother, Eddie Peterson, a 2018 alumnus of MTSU’s Jones College of Business.

At Blackman, Jaia Peterson, who is in the Blaze band and a member of the National Honor Society, is taking advanced placement and MTSU dual enrollment classes.

“MTSU is pretty much the place I want to go,” she said. “I could go somewhere else, but I’m not looking. It’s a pretty good school. You can get a good education without having to go far.”

MTSU will host a recruiting event, Rutherford County College Night, starting at 6 p.m. Wednesday, Sept. 4, in the Student Union Ballroom. Following a True Blue Preview Day on campus Saturday, Sept. 21, it will resume the True Blue Tour Wednesday and Thursday, Sept. 25-26, when it travels to Huntsville and Birmingham, Alabama. 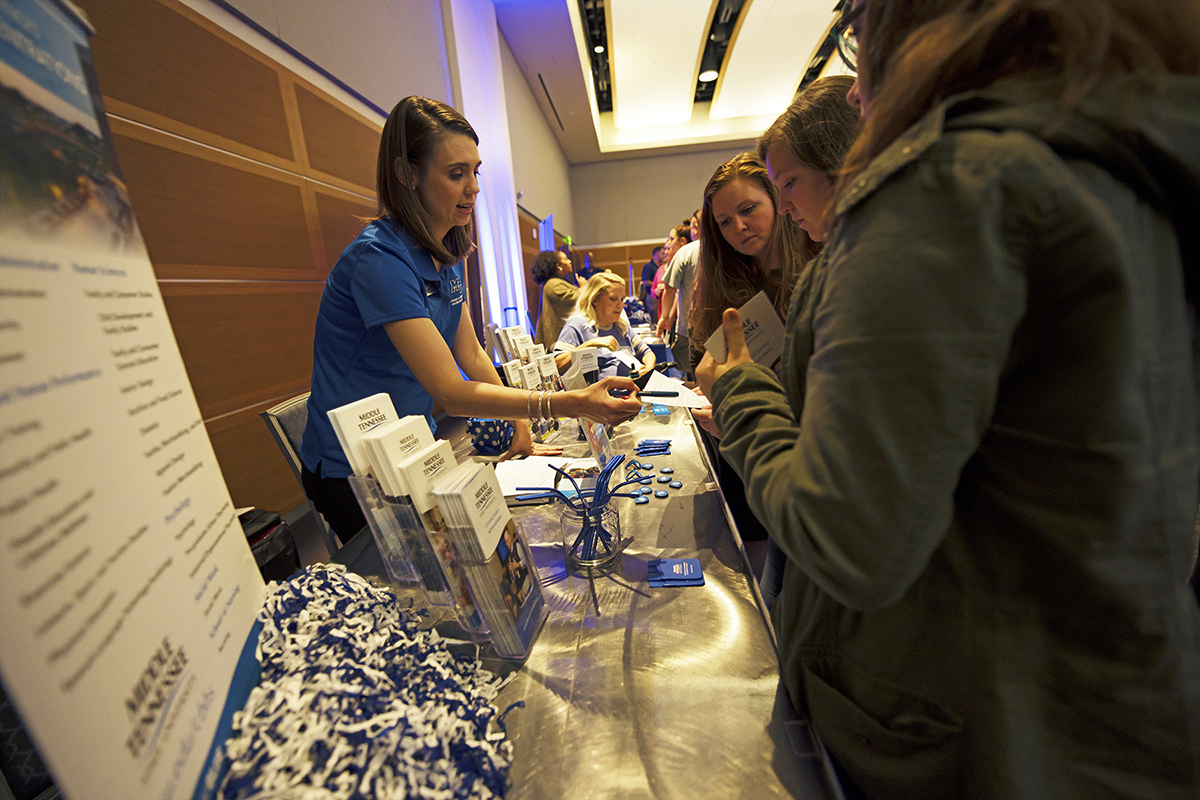 Chloe Calhoun, left, adviser in the College of Behavioral and Health Sciences, shares information about her college’s offerings during the recent True Blue Tour event in the Student Union Ballroom. MTSU staff and administrators answer questions prospective students have about the university and its academic programs and more. (MTSU photo by Cat Murphy)