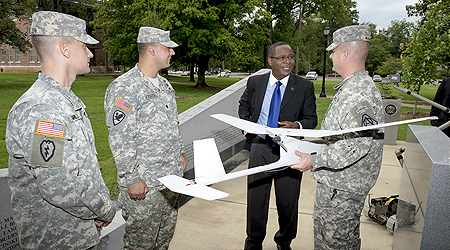 From facilitating missile strikes on terrorists to keeping soldiers from harm’s way by defusing improvised explosive devices in war zones, unmanned aerial and ground vehicles have moved from Hollywood scripts to military necessities.

But the technology surrounding these tools holds greater possibilities on and beyond the battlefield, and MTSU will be at the forefront of that research by partnering with the military to explore ways to improve and expand use of the technology, including commercially.

“Imagine a small unmanned aircraft directing a ground robot where to spot-spray agricultural fields for weeds in real time,” said Mark Blanks, interim director of the MTSU Unmanned Aerial Systems Program. “Or imagine an unmanned ground vehicle providing a closer look at an object identified by an aircraft.”

An historic educational partnership announced Aug. 13 between MTSU, the U.S. Army and the U.S. Marine Corps will explore how to add low-cost hardware and software to existing small robots to use Raven aircraft as an eye-in-the-sky relay. The new pact will study ways robots on the ground can be used in concert with unmanned vehicles in the air.

Research at the MTSU Farm in Lascassas using robotic and unmanned aerial systems may be one of the initial opportunities of the partnership.

The partnership also allows the Army and Marines to help develop courses and materials for MTSU and involve faculty and students in defense-laboratory research projects.

Four students, a military Raven unmanned vehicle, the iRobot PackBot 500 system and other unmanned vehicles participated in a demonstration for media and others attending the announcement — the first of its kind between MTSU and the two military branches.

It comes one year after the University and Army entered into another unique partnership to support MTSU’s educational and research efforts into the Army’s remote-controlled Raven aircraft.

“It’s awesome,” Brent Taylor, a senior aerospace administration and business double major from Fort Campbell, Ky., said of the technology and research possibilities for students. “I stumbled into it in an unmanned aircraft systems class last fall, and then (fellow student) Brett Bornhoft mentioned the Unmanned Systems Club.

“A year later, we’ve already advanced up to two partnerships and received a special-projects grant funding from the MTSU Foundation … that will allow us to purchase things like the robots and the technology that goes with them.”

Such advances would increase the range and utility of the robots and build on the university’s ongoing scientific-research pursuits by students and faculty.

“Our partnership provides us the opportunity to enhance the capabilities of today’s soldier and tomorrow’s commercial markets,” Blanks said.

Many unknowns still surround the project, which is awaiting FAA approval. But unmanned ground vehicles and aircraft potentially could be used in agricultural applications, including:

“We are still trying to determine the way this is going to work,” Blanks said. “We know the systems can be used for ag purposes, but it is doubtful that these systems are ideal for it. They probably will be more of a stand-in for a later-to-be-developed commercial robot product.”

By adding an unmanned aircraft to the mix, Blanks said counter-IED operations gain an aerial view of a specific area and can see insurgent “scouts” or other evidence to help determine if the threat they are investigating is really the explosive device.

Military usage of unmanned ground vehicles can be explained this way:

After the Aug. 13 signing, MTSU senior Steve Lawn, an aerospace professional pilot major from Charleston, S.C., maneuvered a robot across the floor of Cantrell Hall for a demonstration and then outside and down a small flight of stairs to the MTSU Veterans Memorial site.

“The end goal for interoperability (systems working together) is basically to take all unmanned vehicles — air, ground, water — and have a common interface, a common language, so that if a person … gets trained on the system, they don’t have to go to a different training for every single system,” Lawn said.

The robot he demonstrated is considered an unmanned ground vehicle or tracked vehicle with manipulator arm, Blanks said, adding that both systems were used to investigate and probably defeat IEDs during a recent deployment with a combat engineer battalion in Afghanistan.

“These robots save lives,” the Army’s Kioutas said. “The Raven UAVs (unmanned aerial vehicles), they look like little remote-control airplanes, but there’s a lot of technology in there, and those save lives.”

Kioutas added that MTSU’s existing partnership with the Army for education and research on its remote-controlled Raven aircraft, as well as the university’s proximity to Redstone Arsenal, helped clinch the newest agreement.

“The UAS Project Office enjoys a great relationship with MTSU, and we’re excited about this new opportunity for them,” he said.

Blanks re-emphasized the benefit of the partnership to MTSU students.

“Our educational partnership with the Robotic Systems Joint Project Office provides our students with the opportunity to work hands-on with the actual hardware that is employed by today’s soldiers and to research the most cutting-edge advances in unmanned technology,” he said.

“This agreement is another in a series of bold steps forward that we’ve taken to provide the very best in facilities, training and service in this important area,” McPhee added.