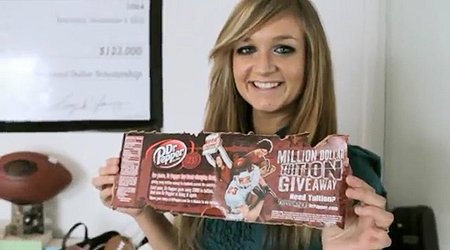 MTSU student Nikki Boon is an aspiring country/pop music artist. It’s fitting, then, that her passion for “pop” got a big boost from “pop” of a different kind.

“My favorite pop has always been Dr Pepper,” said the junior music business major. “Anybody will tell you that.”

MTSU junior Nikki Boon holds up the entry form to the Dr Pepper tuition throw contest that she won at the 2010 SEC championship game in Atlanta. (photos submitted)

After winning $123,000 toward college tuition at the Dr Pepper’s tuition-throw contest at the 2010 SEC football championship game in Atlanta, it’s safe to say her taste for both Dr Pepper and MTSU has grown even stronger.

“Faculty here in the Music Business program have been awesome,” said Boon, who just finished her first year at MTSU. “I’ve had so many opportunities from meeting these music professors who’ve done so much in the industry that now can help me out with my career. I do country music. I sing.”

Boon’s journey started out in Minnesota. After seeing the promotion for the contest on a 12-pack of her favorite soda and with the strong urging of her boyfriend, who was already at MTSU studying the music business, Boon decided to send in a video. Then working at a downtown Minneapolis steakhouse, Boon thought that even if she won a small scholarship, the effort would be worth it.

Two days after submitting her iMac-produced video, she got the surprising call that she was one of five finalists. Competitors would be racing against the clock to see who could throw the most footballs through a 24-inch hole in an oversized Dr Pepper can while standing at the five-yard line. So Boon practiced throwing 100 passes a day, five days a week, for two months.

But after getting a nugget of advice from Minnesota Viking Ray Edwards while working at her steakhouse job — and checking with Dr Pepper about the rules — Boon eventually decided to practice an unorthodox throwing style: a two-handed chest throw. She went 10 for 10.

“Honestly, I was like, ‘OK, that’s the Lord telling me that’s what you’re supposed to do,’” she said.

She made the switch just two days before the game, and once there, survived the preliminary round where the five finalists were trimmed to two. Then game day came, and the clock started ticking.

Boon was up for the challenge, won the grand prize and decided to transfer from the Minnesota college she was attending to Belmont University in Nashville.

She soon discovered that MTSU was a better fit for her and enrolled last year. The tuition savings, combined with her ability to now help her siblings more, made MTSU the right choice.

“My boyfriend was here at MTSU in the recording industry program, and he was telling me all this really awesome stuff about things they were doing and people they were bringing in to speak,” she said. “I started checking out stuff and the more and more I started to check out things in the music program at MTSU, the more and more it sparked my interest.”

The Department of Recording Industry at MTSU is one of the largest programs of its kind in the world with an average enrollment of 1,200 to 1,700 students. The program offers a bachelor’s of science degree in audio production, music business and commercial songwriting concentrations.

Boon said she wants to know all aspects of the profession from artist management to accounting to copyright law. She hopes to graduate next December.

Watch a brief video about Boon below.