With the raising of his right hand as MTSU professor of military science Lt. Col. Joel Miller administered the ROTC contracting oath, Murfreesboro resident Brian Roy was doing “something I always wanted to do.”

Roy’s desire was to become a member of the military. Along with fellow freshman Tyler Holweg of Morristown, Tenn., and seven juniors, Roy became part of the cadet corps in hopes of eventually being commissioned as a second lieutenant in the U.S. Army upon graduation from MTSU.

“This means the start of my military career,” said Roy, who was home-schooled and plans to be a global studies major. “I’m just glad I’m getting to start my career. It’s something I decided to do on my own.”

Economics major Holweg said it “always had been a dream of mine since I was little” to join the military and serve his country.

“It’s something I feel obligated to do, and this was the best avenue,” said Holweg, whose parents, Eric and Karen Holweg, made the trip from East Tennessee to bring their son to campus and stayed for the ceremony.

As for why he chose MTSU, Holweg said “it seemed like the right fit. The program was good and it’s a good distance from home.”

Junior Kylie Youngston of Savannah, Tenn., was the lone female to accept the oath and be sworn in by Miller.

“I already was in the National Guard,” said Youngston, who is a social work major. “I just did it to better my career and advance faster.” 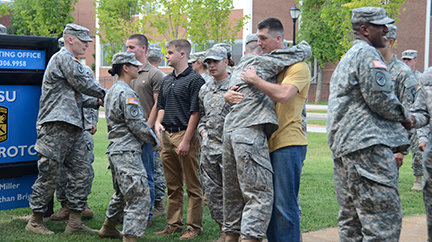 Miller called it an important ceremony for the new cadets.

“While we celebrate your commitment, now comes the hard work in completing that process,” he said to them.

By the first part of the fall semester, military science will have approximately 50 contracted cadets and 108 students enrolled in the program, Miller said. 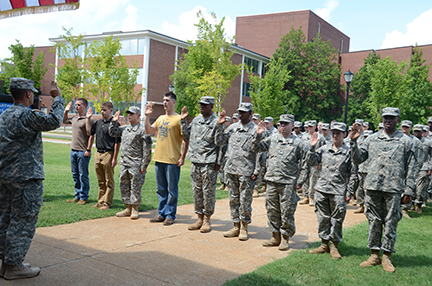 Watch a video of the ceremony below.