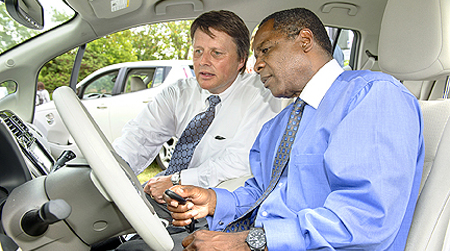 MTSU officials said the Nissan LEAF cars will be added to the university’s motor pool. The charging stations will be available for use by students, faculty, staff and visitors on the Murfreesboro campus.

“As Nissan and MTSU are two of the largest employers in Rutherford County, our future and success are, in many ways, intertwined,” MTSU President Sidney A. McPhee said at the Aug. 28 announcement event. “This is a significant expansion in the relationship we have enjoyed with Nissan.

“It is another step in building a stronger partnership between our two organizations. We look forward to learning more about Nissan’s innovations in electric-vehicle technology by putting these vehicles to work for our university.”

Watch a brief video from the announcement ceremony here.

Nissan’s Rutherford County plant in Smyrna, one of its three U.S. production plants, opened in June 1983. The vehicle assembly plant has an annual production capacity of 550,000 vehicles and represents a capital investment of $2.5 billion. Nissan plans to open a new plant in Smyrna this fall to produce lithium-ion batteries for the Nissan LEAF — the first facility of its kind in the United States.

Kevin Martin, director of Nissan Parts Quality Engineering, said the MTSU donation “builds on the long-standing relationship between Nissan and MTSU, and it points to our mutual passion for quality — both in engineering and in education.”

“We hope that the innovation behind the Nissan LEAF inspires MTSU students interested in advanced technology,” Martin added.

Martin said the Nissan LEAF is 100 percent electric and available in all states. Its features include:

The automaker also donated a Titan pickup truck to the university, Martin said.

Headquartered in Franklin, Tenn., Nissan North America coordinates all operations in the United States, Canada and Mexico, including automotive styling, consumer and corporate financing, and engineering. About 370 of Nissan’s employees are MTSU graduates, company officials said.