Entrepreneur and author Sam Davidson told students at the 2016 MTSU Nonprofit & Social Innovation Student Summit that to do what they love without going broke, they needed to identify where their passions, talents and societal needs intersect.

In just two years, he led Batch as CEO to cross the $1 million annual revenue threshold. He also co-founded the company “Cool People Care,” which sold apparel to support nonprofits.

The Nashville native is also author of the books “Simplify Your Life, 50 Things Your Life Doesn’t Need” and “New Day Revolution.” His messages focus on entrepreneurship, leadership, service, innovation and how you can have a greater effect on the world through each. (Learn more at http://samdavidson.net.)

Davidson told students that he’s heard so many stories over the years about people who started something based on a passion, “something that they want to live for … and they don’t want to relegate that passion to nights and weekends.”

He spent the next hour offering students tips on how to properly identify their own passions, honestly assess their talents and strategically embrace a need in the world that those passions and talents can address.

“When you can show somebody something, they’ll pay for it,” he said.

MTSU senior Travis Elliott, a business administration major from Clarksville, Tennessee, said Davidson’s insights helped him understand “how I could change the world based on my passions, my talents … and the needs of the world.”

Elliott, who graduates in May, is passionate about ministry work. His goals include using his business training to own a hotel that serves the homeless and to turn his passion for cooking into a ministry “to feed the world.”

Such inspiration was among the goals for the summit, said Dr. Leigh Anne Clark, a summit organizer and associate professor of management in the Jennings A. Jones College of Business.

“One of our goals with the conference is to be a catalyst for students, that it either really inspires them or gives them a connection, a skill or a thought that leads them further down their path,” Clark said.

“This is important to all students, because when you’re building your resume, you want to show that you’re more than just a good student. You want to show your interests elsewhere.”

In its first two years alone, the summit has drawn a cross-disciplinary mix of more than 400 student participants. Organizers say that the summit gives students who are interested in pursuing careers in the nonprofit arena a great opportunity to network, gain a deeper understanding of nonprofits, and perhaps secure an internship through a volunteer/internship fair, which attracted more than 40 local nonprofits this year.

A session on “Working Across Borders” featured representatives from three nonprofits that do work overseas — James Threadgill from Team Rubicon USA, Dave Rogers from Hope for Justice, and Lindsay Moore from Project C.U.R.E.

The week of events was made possible with primary support from the Jennings and Rebecca Jones Foundation in addition to support from funding from the sponsoring departments. 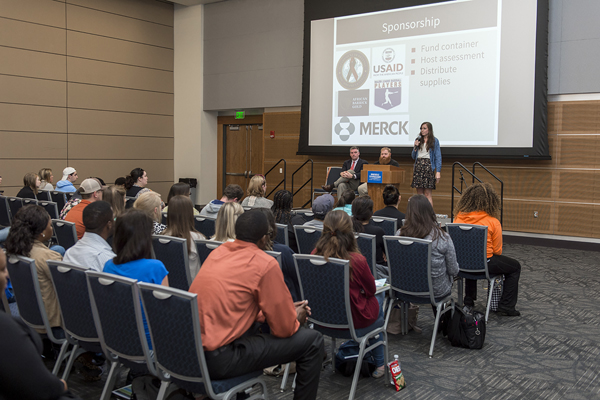 Lindsay Moore from Project C.U.R.E. speaks to students during a session on “Working Across Borders,” held April 5 at MTSU’s third annual Nonprofit & Social Innovation Student Summit.Also on stage are, from left, Dave Rogers from Hope for Justice and James Threadgill from Team Rubicon USA.(MTSU file photo by Andy Heidt)