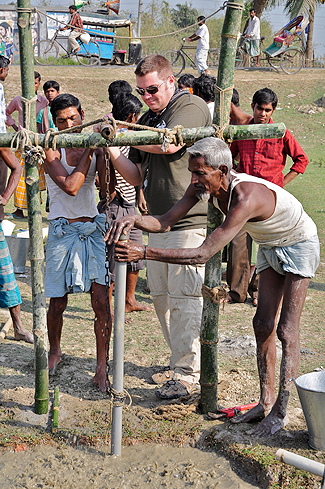 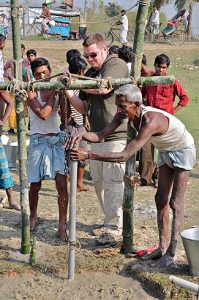 Thomas Hartzog, a graduate student at Vanderbilt University, is assisting in the drilling of a tube well in Bangladesh. This simple, local technique in which the drill pipe is lifted and dropped while the driller in from uses his hand as a valve on the drill pipe is capable of drilling a 100 meter deep well in a day. The first year saw the completion of a transect of 41 wells. Principal Investigators Michael Steckler of Columbia University and Syed Humayun Akhter of the University of Dhaka will represent and present on this pilot project. Steckler received $4.5 million of funding from NSF’s Partnerships in International Research and Education (PIRE) program; Akhter leads the Bangladeshi counterparts that received USAID pilot funding to train 30 Bangladeshi scientists and establish a seismic data processing center at the University of Dhaka.