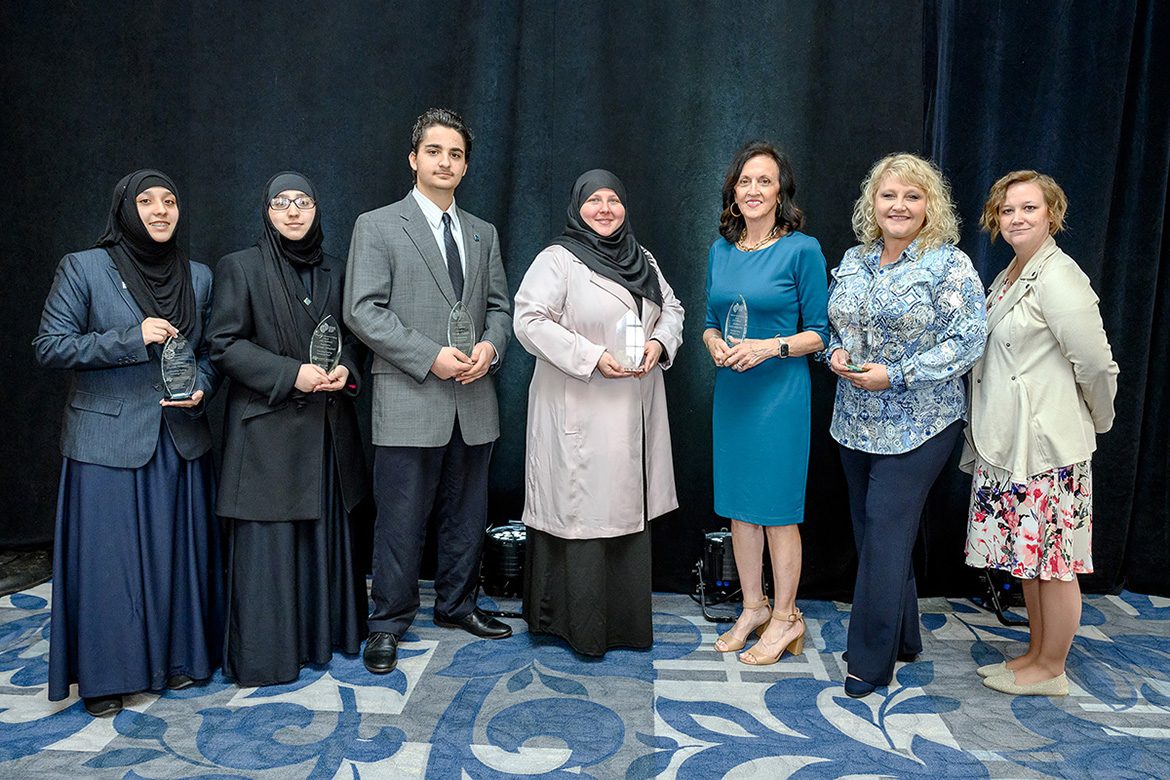 Six individuals were lauded for their pioneering efforts to aid women at the 2022 Trailblazer Awards at MTSU.

In the official closing ceremony for National Women’s History Month, the statuettes were presented March 29 at the MT Center in the Ingram Building. The winners represent members of the MTSU community and members of the greater community who are nominated and voted on by MTSU faculty, students and staff.

In reflecting on the events celebrating women in the month of March, NWHM Committee chair Maigan Wipfli said they characterized this year’s theme of “Providing Healing, Promoting Hope.” 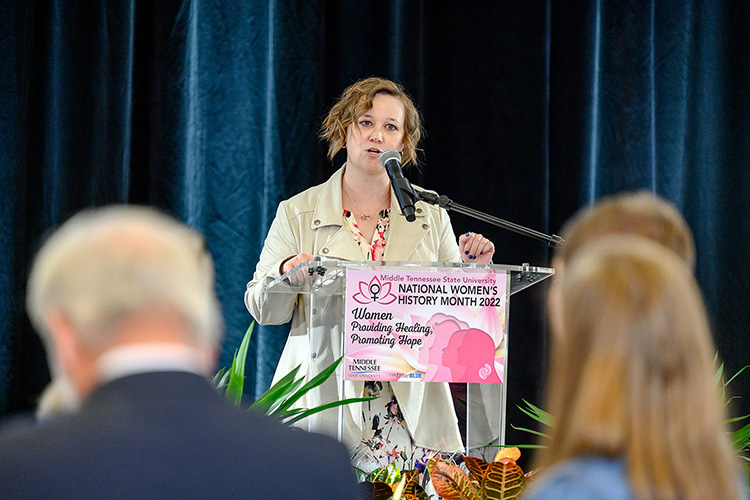 Maigan Wipfli, chair of the MTSU National Women’s History Month Committee and director of the June Anderson Center for Women and Nontraditional Students, thanks all those who participated in and contributed to the university’s National Women’s History Month activities during March. Wipfli delivered her remarks at the NWHM Closing Ceremony March 29 in the Ingram Building. (MTSU photo by J. Intintoli)

“We were fortunate to have many faculty-led programs this month, including embracing and advancing DEI (diversity, equity and inclusion) and respect in the chemical sciences, sequencing DNA analysis and ‘Slutwalk Revisited: Looking Back on the Slutwalk Movement a Decade Later,’” Wipfli said.

Wipfli, who is director of the June Anderson Center for Women and Nontraditional Students, also highlighted musical events that featured women and nonbinary persons and celebrated women composers.

Lucy Langworthy, an adviser to the dean of the College of Liberal Arts, is the former manager of that college’s advisers. This Trailblazer Award winner was hailed for her work as a mentor, helping students to make major life decisions even after they graduated.

“Offering hope, to me, is natural to all of us at the university since education itself is one of the most valuable currencies of hope in our world,” Langworthy said. “I have worked with many people on the MTSU campus who bring healing and hope. So to be recognized among these special people is a great honor to me.” 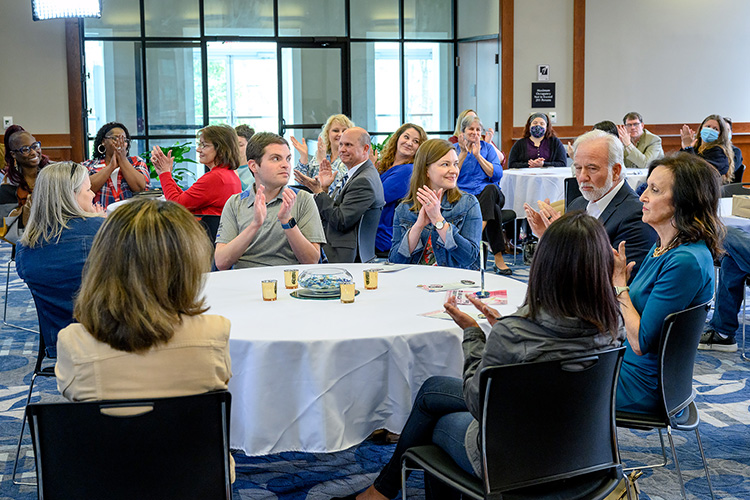 “I’m so honored that I have been recognized for the work that not only I’m doing, but that Habitat’s doing, in the community and the fact that my peers find that what I’m doing supports women in making sure that they’re able to become first-time homebuyers,” Schultz said.

The Future Trailblazer awards were presented to Khadijah Alnassari and her 15-year-old triplets, Ahmed, Fatimah and Zaynab. Khadijah was the prime organizer of the inaugural Festival of Veils, a March 19 event centered around enlightening the public about the use of veils in various religions and cultures. All four Alnassaris are MTSU students.

“Having (my children) as awardees made it a much richer event because it’s more of a family event, something we can all do together,” Alnassari said. “I love seeing that I made strong women who can stand up for themselves and a son that believes in the equality of women.”

Ahmed Alnassari tutors and mentors teenaged boys in Nashville on the weekends. He has volunteered for Habitat for Humanity and has worked as an assistant to a doctor with Medical Brigades in Honduras.

Fatimah Alnassari is co-founder and secretary of Al-Wahda, an MTSU student organization focused on inclusivity and acceptance. She also is a mentor and tutor and has taken up donations for Raiders’ Closet.

Zaynab Alnassari, the event coordinator for Al-Wahda, also volunteers her time to help other teenagers. She is the recipient of an Undergraduate Research Experience and a creative activity research grant, and she delivered a presentation at the undergraduate research showcase. 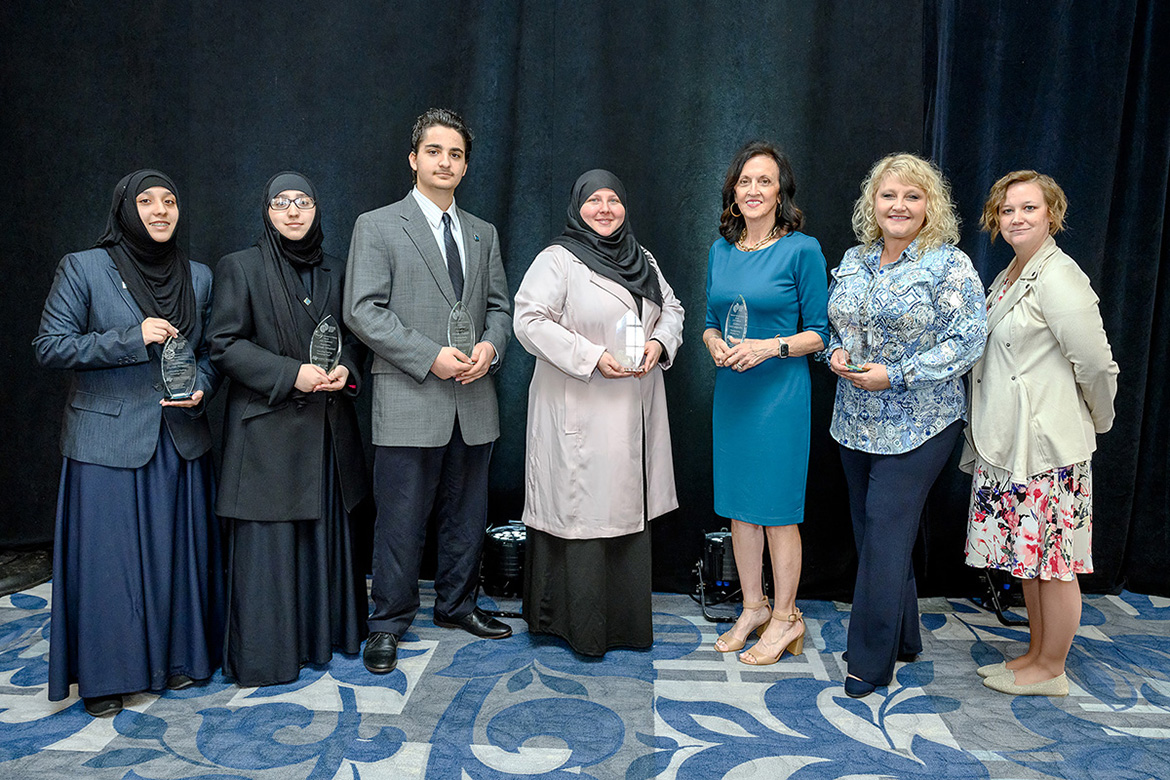 The winners of the 2022 Trailblazer Awards pose with their statuettes at the conclusion of MTSU’s National Women’s History Month Closing Ceremony March 29 at the Ingram Building. From left, MTSU students and Future Trailblazer winners Zaynab Alnassari, Fatimah Alnassari, Ahmad Alnassari, and Khadijah Alnassari; Trailblazer winners Lucy Langworthy, advisor to the dean of the College of Liberal Arts, and Terri Schultz, executive director of Habitat for Humanity of Rutherford County; and Maigan Wipfli, chair of the MTSU NWHM Committee and director of the June Anderson Center for Women and Nontraditional Students. (MTSU photo by J. Intintoli)