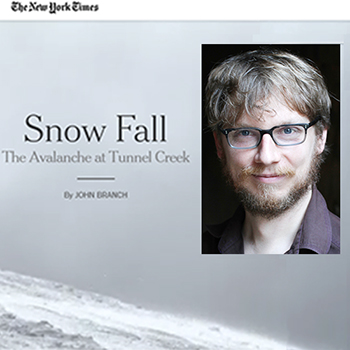 The public lecture, scheduled for Room 160 of the College of Education Building, will begin at 6 p.m. You can find a searchable campus map with parking details at http://tinyurl.com/MTSUParking14-15.

Williams, who is based in San Francisco, works on a range of projects for Web development, design and storytelling for The New York Times.

His work was instrumental in the newspaper’s 2013 Pulitzer Prize win for “Snow Fall: The Avalanche at Tunnel Creek,” which told the story of 16 skiers and snowboarders caught in a February 2012 avalanche in Washington state’s Cascade Mountains near Stevens Pass. Three died and one was seriously injured.

His colleague John Branch won the Pulitzer for Feature Writing, and the judges noted that the story was “enhanced by its deft integration of multimedia elements.” Williams worked on the Times’ multimedia presentation of the story, which you can see here, and led development of the mobile coverage.

He’s received four Emmy nominations, and the Society of News Design, the Online News Association, Pictures of the Year International and the National Press Photographers Association, among others, have recognized his work.

The New York Times’ Pulitzer Prize-winning 2012 package on a deadly Washington state avalanche includes multimedia work on its Web site by MTSU guest lecturer Josh Williams. You can see the story by clicking on this image.

“Josh Williams is a recognized multimedia authority, and his visit will give our students the opportunity to visualize their own careers in today and tomorrow’s digital-storytelling world,” said Dr. Dwight Brooks, director of the MTSU School of Journalism.

“He is already doing what we’re teaching our students to do, and he’s a master at it.”

Williams plans to visit journalism, visual communication and public relations classes before his evening lecture. He also will spend time with the staff of Sidelines, MTSU’s student newspaper.

Before he joined The New York Times, Williams was the new media projects editor at the Las Vegas Sun, a multimedia exhibit developer at the Smithsonian Institution and a Web developer at various Washington, D.C., nonprofits. He also serves as an adjunct professor at the Graduate School of Journalism at the University of California, Berkeley, and has taught at Columbia University.

The Williams visit is sponsored by the MTSU Distinguished Lecture Committee, the College of Mass Communication, the School of Journalism, the John Seigenthaler Chair of Excellence in First Amendment Studies, the Department of Electronic Media Communication and the Society of Professional Journalists, Middle Tennessee Professional Chapter.