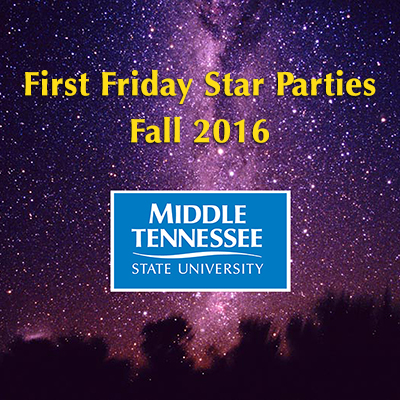 The event is free and open to the public and campus community, and children are welcome.

Free parking is available after 6 p.m. Friday near the MTSU Science Building at 440 Friendship St.. A printable campus map can be found at http://tinyurl.com/MTSUParkingMap.

MTSU’s Department of Physics and Astronomy presents the First Friday Star Parties to bring the MTSU, Murfreesboro and surrounding communities together. Each event features a special lecture followed by telescope viewing at the MTSU Observatory, weather permitting.

“The detection was an experimental tour de force: two laser interferometers, in Louisiana and Washington, each 4 kilometers across, that saw synchronized movements of their test masses by less than the diameter of a proton,” Mahurin said, adding that the discovery of gravitational waves begins the era of gravitational astronomy.

“As with the invention of radio telescopes, infrared telescopes, ultraviolet telescopes and X-ray telescopes, gravitational waves allow astronomers to observe parts of the universe which have until now been invisible,” he said.

For more information about the series or MTSU’s astronomy program, call 615-898-2130 or visit www.mtsu.edu/programs/astronomy.