MTSU’s Omicron Delta Kappa chapter recently was recognized with the national honor society’s 2016-17 Presidential Circle of Excellence. It is the first award of this caliber for the campus chapter.

ODK comprises more than 300 chapters nationally, and the MTSU circle was one of only a handful to be selected for the special honor by the ODK board of directors. 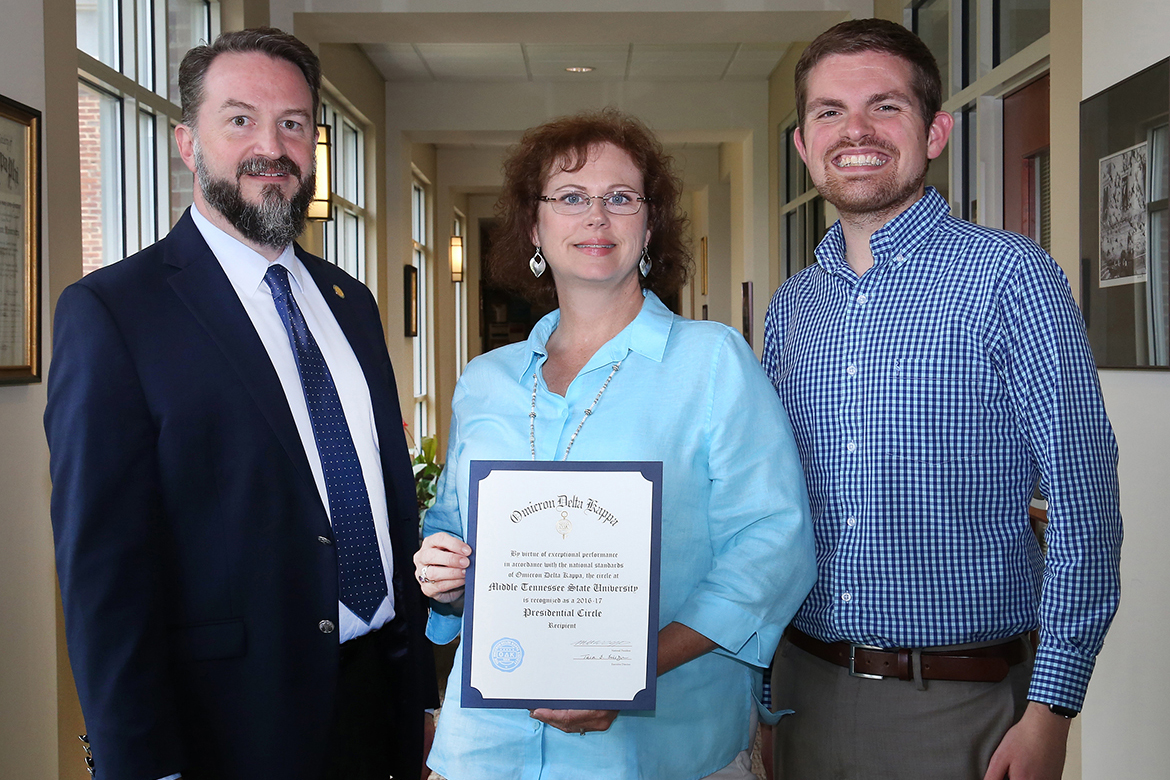 Founded in 1914 at Washington and Lee University in Lexington, Virginia, ODK honors and develops leaders through scholarships, workshops, career opportunities, leadership resources and a lifelong connection to other members.

To learn more about the MTSU chapter, which is housed in the University Honors College, visit http://odk.org/circle/mtsu.

The certificate sent to MTSU reads: “By virtue of exceptional performance in accordance with the national standards of Omicron Delta Kappa, the circle at Middle Tennessee State University is recognized as a 2016-17 Presidential Circle recipient.”

“This is the top level of award that is given to a circle by ODK,” said Matthew Hibdon, a member who helped establish MTSU’s chapter in 2010 and who now serves as national headquarters liaison.

Hibdon, an MTSU alumnus (Classes of 2012 and ’14), is taking a director of leadership programs position at ODK’s national headquarters Tuesday, Sept. 5. His last day at MTSU will be Friday, Sept. 1.

The McMinnville, Tennessee, native has been on the ODK Membership and Circle Standards Committee since 2012 and served on the National Advisory Council from 2012 to 2014.

The MTSU circle has initiated 182 members since its chartering in 2010. Initiations are held in November and in April.

MTSU ODK members actively participate in service projects throughout the year and attend meetings. One project is an annual ODK True Blue Leadership Day, usually held in the spring.

MTSU, Austin Peay State University and Belmont and Vanderbilt universities will collaborate to co-host the 2018 ODK biennial convention and leadership conference at Belmont — the 50th national convention of the organization, Hibdon said.

To apply for membership, visit membership.odk.org.