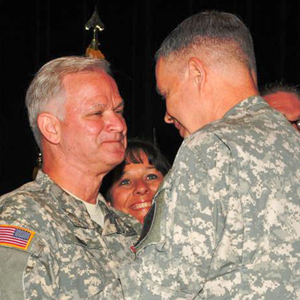 Retired U.S. Army Brig. Gen. R. David Ogg Jr. will join the task force that will consider whether to change the name of MTSU’s Forrest Hall, the university announced Monday.

Ogg, a member of the university’s Military Science Alumni Chapter Hall of Fame, received his officer’s commission through MTSU’s Army Reserve Officer Training Corps program after graduating with a bachelor’s degree in 1978. He earned a master’s degree from MTSU in 1987.

He retired from the Army in 2010 after 32 years of service and lives in Murfreesboro, where he works as a consultant to the defense industry.

“General Ogg’s perspective as a graduate of MTSU’s ROTC program and a flag officer of our armed forces will be valuable to the deliberations of the task force,” said MTSU President Sidney A. McPhee.

The university announced in June that it would engage the community on the name of the campus building that houses MTSU’s ROTC program and is named after Confederate Gen. Nathan Bedford Forrest.

The decision came following a mass shooting at a historically black South Carolina church that prompted a national discussion about Confederate iconography on public property.

Ogg becomes the 16th voting member of the task force, which includes faculty, alumni and student representation, as well as community members.

McPhee said the panel has been asked to recommend by April whether the building should be renamed; retain the name but with added historical perspective; or recommend that no action or change is warranted.

The Tennessee Board of Regents would have to approve any recommended name change and the university is also researching whether other state authorities would have to give approval as well.

For more information about the task force’s work, visit http://mtsu.edu/forresthall.