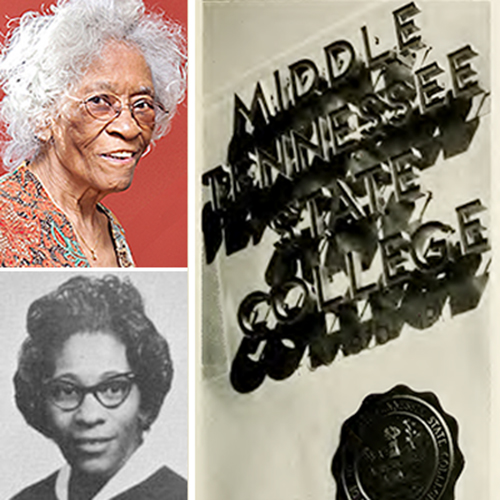 The MTSU community is mourning the passing of its first African-American undergraduate student.

Olivia Murray Woods died Oct. 2 at the Bridge at Hickory Woods, an assisted living center, in La Vergne, Tennessee. She was 96 years old.

Visitation with her family is set from 11 a.m. to noon Saturday, Oct. 8, at the Allen Chapel African Methodist Episcopal Church, 224 S. Maney Ave. in Murfreesboro. A celebration of her life will begin at noon at Allen Chapel AME, and burial will follow at Evergreen Cemetery.

Scales and Sons Funeral Home of Murfreesboro is handling arrangements.

A native of Murfreesboro, Olivia Murray was born April 15, 1920. She attended both Bradley Elementary School and Holloway High School, where her love of education survived both segregation and the Great Depression.

“Her teachers really stressed it, even back in those times,” said her younger son, George Woods.

George Woods said his mother enrolled at then-Middle Tennessee State Teachers’ College in fall 1962 as a transfer student after her husband told her that his salary alone would not be enough to put their three children through college.

“All she wanted to do was to get her degree so she could go back to work,” said George Woods, who also is an MTSU alumnus.

Mr. Woods said his mother told him about only one racially tinged incident that occurred during an orientation session: she said a white man said, “It’s getting awfully dark in here” while walking past her on campus.

Dr. Quill E. Cope, then president of MTSU, heard the comment and told the assembly he wanted to talk to whoever made that remark at the conclusion of orientation. From that point on, Woods experienced no difficulties, according to her son.

“In passing, some (students) might kind of shun me, you know,” Woods said in a June 19, 2001, oral history interview for MTSU’s Albert Gore Research Center. “But that didn’t matter, because I was there to get an education, to get a job, so we could educate my children.”

Olivia Woods graduated in May 1965 with a bachelor’s degree in elementary education and a minor in humanities. She obtained her master’s degree in curriculum and instruction in 1974. By then, Woods said, blacks were more readily accepted on campus.

“But most of the people who were going nights and doing intersession (early summer courses), they were like me,” Woods said in the 2001 oral history interview.

“They were more interested in getting that degree to help them further their education and increase their pay than they were in trying to prove something.”

Woods taught second- and third-graders full-time in Murfreesboro City schools, retiring in 1986 after 21 years as a teacher.

She was a member of Mount Zion Baptist Church as a child and joined Allen Chapel AME Church after marrying her husband.

MTSU honored her as one of the community’s “unsung heroes” at the February 2012 Unity Luncheon celebrating Black History Month.

You can listen to Olivia Murray Woods’ 2001 oral history interview here. A 2011 MTSU Centennial Celebration Countdown video interview that includes footage of Woods is below.