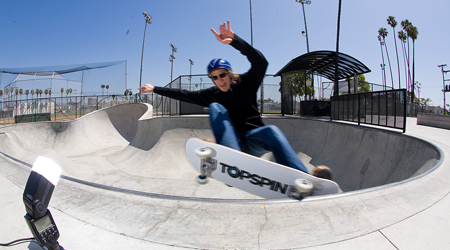 Online music mogul Ian Rogers shared his knowledge with MTSU on Nov. 10 during a special visit with the University’s Department of Recording Industry.

Rogers is the chief executive officer for Topspin Media, a direct-to-fan marketing, management and distribution platform that helps artists in music and film manage their catalogs, connect with fans and generate demand for products.

He spoke in Room 221 of the McWherter Learning Resources Center on “Disrupting the System: The Evolution of Web Distribution for Music and Film, a Mass Of Niches and the Era of Trusted Brands.”

Rogers was the general manager for Yahoo! Music before joining Topspin in 2008. He previously co-founded Mediacode, a personal music sharing-software provider, and sold it to Yahoo. Before his work with Mediacode, Rogers worked as one of the principals at Grand Royal with the Beastie Boys, leading to his nickname as “the fourth Beastie Boy.”

Nine Inch Nails, Sundance Films, the Beastie Boys, film director Kevin Smith, David Byrne and Brian Eno, the Civil Wars, The Pixies, Fanfarlo and hundreds of others use the Topspin platform and marketing services and have seen significant increases in their fan bases and sales.

Funding and other services for Rogers’s visit were provided by MTSU’s Office of New Student and Family Programs, the Department of Recording Industry and Omega Delta Psi.