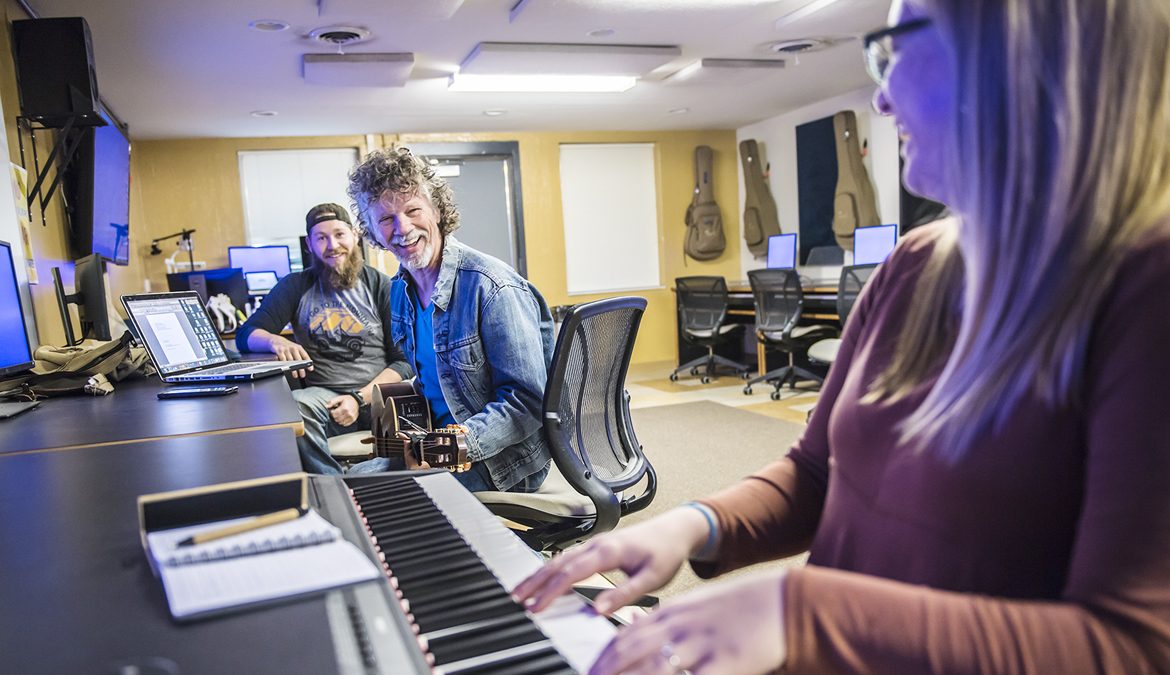 They served. They survived. Some of them speak of it.

Now more military veterans are singing about their experiences, with support from the musicians of the Nashville-headquartered Operation Song and a growing partnership with MTSU’s Commercial Songwriting Program.

Each vet again worked with a student writer and a professional songwriter, then the trios premiered the new song at an informal showcase.

They sang of commanding officers, devoted loved ones, brothers and sisters in arms, hardscrabble origins, family heritage, and the psychological and physical wounds they still carry. And they sang of hope.

“There’s been someone in the military service in my family since the 1890s, when my great-grandfather came over from Ireland,” explained Jay Reilly, a retired sergeant first class and 27-year U.S Army veteran who is also an academic adviser for MTSU’s University College.

“There was an event that happened one Thanksgiving that caught (songwriter) Marc Beeson’s attention, so we were talking about family and then the extended family we all get through the military, and we wound up with this.”

Five of Reilly’s uncles, all D-Day veterans, were part of a holiday family gathering several years ago, he explained. They’d never discussed their experiences with the family, but that cold, rainy day was different.

“One bombed the beaches a few hours before
One drove the boat that brought troops ashore
One dropped in, two landed in the heart of that war
They gave all they had and then they gave more
They were soldiers, sailors, Air Force, Marines
Wounded and shell-shocked with PTSD
These brothers from other mothers stand or fall
They’re all American sons”

Caleb Allen of Nashville, a third-generation Army veteran who worked with pro songwriter Wil Nance and senior commercial songwriting major Karis Bradley, noted that he “didn’t get as personal as some of the others” with his song “Lucky Me, Lucky You.”

He did make it simple, succinct and very catchy, leaving audience members humming its harmonies after the performance.

“I’m passionate about this. People keep bickering and arguing over silly stuff that doesn’t really matter when there’s kids in other countries who don’t know whether they’re gonna eat,” he explained. “They don’t realize how lucky we are.”`

Operation Song, established in 2012 by Nashville songwriters who met veterans worldwide during Armed Forces Entertainment Tours, helps retired and active-duty veterans and their families sort out their experiences and emotions by telling their stories and turning them into song.

“My mind is always blown at these sessions, and today was no exception,” said Operation Song founder Bob Regan, who wrote with veteran John Douglas and MTSU student songwriter Eli Kirk.

“I’m so proud of these veterans for telling their stories and of the student songwriters and my good buddies … I could not be more proud of all of you being a part of this.”

The songwriting students will receive credit for their Advanced Commercial Songwriting experiential learning course, which allows them to work with music industry mentors and co-write with pros on songwriting concepts and assigned writing projects.

Friends, family members, songwriters and other supporters of local veterans applaud after a performance at the Operation Song 2017 informal showcase in MTSU’s Bragg Media and Entertainment Building. The daylong project, now in its second year at MTSU, teams military veterans, professional songwriters and MTSU student songwriters to provide an outlet for the veterans’ stories and training for the students. (MTSU photo by J. Intintoli)