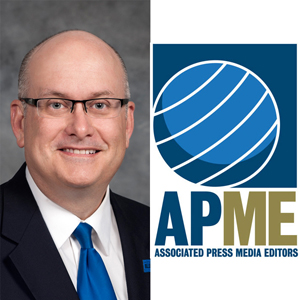 PALO ALTO, California — Andrew Oppmann, an adjunct professor of journalism in MTSU’s College of Media and Entertainment, was recently named a regent of the Associated Press Media Editors, a group representing the member news organizations of The Associated Press in the U.S. and the Canadian Press in Canada.

Oppmann, 52, who also serves as MTSU’s vice president for marketing and communications, was recognized for distinguished service to APME. He is in his second term at editor of APME News, the association’s quarterly magazine, and has been the emcee of the association’s annual conferences for almost a decade. He was honored at APME’s 2015 conference in Palo Alto.

Before joining MTSU in November 2010, he served for more than 25 years as an editor, reporter or executive for news organizations in seven states.

Most recently, he was president and publisher of The Daily News Journal in Murfreesboro and The Leaf-Chronicle in Clarksville and vice president of The Tennessean in Nashville.

The Associated Press Media Editors is an association of news and broadcast leaders, and journalism educators and student leaders in the United States and Canada. APME works closely with The Associated Press to foster journalism excellence and to support a national network for the training and development of editors who run multimedia newsrooms.

APME is focused on advancing the journalism profession and providing feedback to The Associated Press on its news and services. It’s on the front line in setting ethical and journalistic standards for newspapers and broadcast outlets and in the battle for freedom of information and the First Amendment. Learn more at www.apme.com.