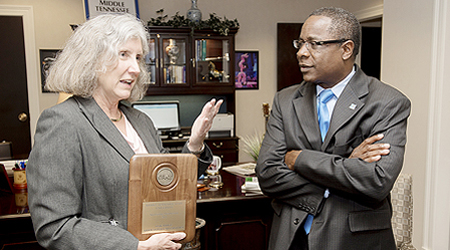 Middle Tennessee State University continues to strengthen its credentials as a scientific research institution by becoming one of only 105 universities in the country to gain full membership with the Oak Ridge Associated Universities.

Dr. Arlene Garrison, left, of Oak Ridge Associated Universities presents a plaque to MTSU President Sidney A. McPhee in recognition of MTSU’s role as a “sponsoring institution” of the ORAU Consortium. (MTSU photo by Andy Heidt)

“For our Ph.D. programs, it’s an opportunity to have another research vehicle for not only our faculty, but our students,” McPhee said. “I’ve always been really impressed with the work of ORAU. It’s a world-class operation.”

According to Dr. Michael Allen, MTSU vice provost for research and dean of the College of Graduate Studies, the prestigious designation gives MTSU faculty and students an opportunity to land members-only grants and internships and also provides a “gateway” to laboratory research at federal facilities.

“You have to be a full-fledged research university to become a sponsoring institution,” Allen said, noting that MTSU had been an associate member since 2006.

ORAU facilitates access for its member institutions to Oak Ridge National Laboratories, Y12 and the Department of Energy and its programs. ORAU consortium members meet annually to discuss topics of mutual interest and network for increased partnership opportunities.

“Your students now have a great opportunity to be placed,” Garrison said. “We placed over 7,000 students last year.”

“ORAU is a critical partner to promote growth of MTSU’s research enterprise,” said Dr. Andrienne Friedli, director of the MTSU Center for Advancement of Research and Scholarship within the Office of Research.  “We look forward to increased research opportunities for MTSU faculty and students.”

The nonprofit ORAU pushes innovation by leveraging the strength of major research institutions to advance science and education. Those institutions partner with national laboratories, government agencies and private industry.

ORAU manages the Oak Ridge Institute for Science and Education for the U.S. Department of Energy and provides opportunities for university faculty to tap millions of dollars in grants.

“They can be relatively large grants, hundreds of thousands of dollars,” Allen said.

“ORAU supports STEM education programs, and that is one of our niche areas,” Allen said.

The designation comes as MTSU proceeds with construction of a new $147 million science building, which broke ground in the spring and likely played a role in MTSU securing acceptance as a sponsoring institution.

“When they were making a decision on whether to make us a sponsoring institution, the president and CEO of ORAU visited campus to see our facilities,” said Allen.

He added that MTSU officials presented the plans for the new science building as well as the state-of-the-art air traffic control tower simulator housed in the Business and Aerospace Building.

“He saw that we are an up-and-coming research university,” Allen said.