MTSU thanks recording-industry alumnus with honora... 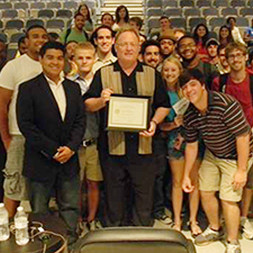 Beverly Keel, the department’s chair, said Overton “has been so generous with his time, guidance and advice that we were eager to bestow this rare honor on him.”

Sony Music Nashville chairman and CEO Gary Overton, center, is surrounded by MTSU students as he holds a plaque commemorating his designation as honorary professor in the Department of Recording Industry. (Photo courtesy of MTSU Sidelines)

Calling Overton “one of the most successful graduates in the 40-year history of the Department of Recording Industry,” Keel added that “students are still buzzing with excitement about his recent talk here and were inspired by his words of wisdom and encouragement.

“He is a wonderful ambassador for MTSU and country music.”

The surprise presentation of the honorary professorship was made after Overton’s recent campus discussion with about 250 MTSU students. He was the first speaker in the department’s new Chair’s Speakers Series.

During his tenure, the company earned a dozen Publisher of the Year honors from ASCAP, BMI and/or SESAC performing rights organizations.

Before joining EMI, Overton was personal manager for superstar Alan Jackson and also worked as head of A&R for BNA Entertainment and vice president of Warner/Chappell Music.

For more information on MTSU’s recording industry program, visit http://recordingindustry.mtsu.edu or contact Keel at beverly.keel@mtsu.edu or 615-898-5150.