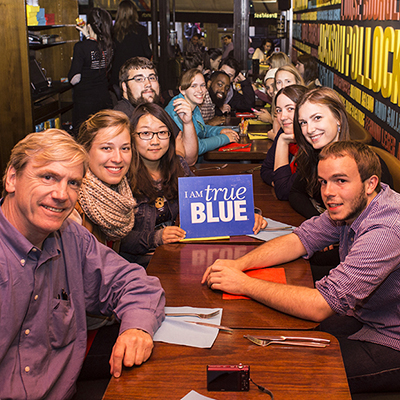 Eleven MTSU College of Mass Communication students screened their cinematic work from their summer travels to Paris during a special event at Nashville’s Belcourt Theatre.

The students traveled to France in May as part of the MTSU Signature Documentary Program Abroad to create stories about artists who live and work in Paris. The three short films that resulted had their premieres Sept. 30 at the Belcourt.

Led by Documentary Channel founder and MTSU associate professor Tom Neff, the program resulted in films centered on up-and-coming fashion designers and musicians. The films — “Fighter,” “A Designer’s Canvas” and “Le Debut” — were directed, produced and edited entirely by the students.

“I have judged many festivals for documentaries, and the excellence of the work of these MTSU students rivals anything being produced in the country today,” said Neff, a lecturer in the university’s video and film production program.

“The audience will be very impressed with the quality and professionalism of the documentaries the students have created, and the films showcase the ability and talent of the students at MTSU.”

“Fighter” is about an Afro-French singer named Jara Ezo and her first big solo, “Dangerous Fighter.” With immigrant parents from Togo, Africa, Ezo grew up in the south of France. As a child she was beaten and bullied for being the only black girl in town, an experience that haunted her until her father taught her to fight back. He died when she was 17, and Ezo was left to continue fighting for her dreams without him. She leaned on the women in her life who taught her dance, music and courage. In “Fighter,” viewers will meet the three women who help shape her destiny.

“A Designer’s Canvas” is about a young fashion designer named Pierre-Henry Bor, who has been an artist since he was a kid. The spark for fashion design came to him when he came across the fashion institute, Instituto Marangoni. He has interned for famous designers such as Eric Charles Donatien and Iris Van Herpen. His designs are heavily influenced by these designers and reflect the classic architectural style of Paris.

And “Le Debut” is about Alice Elia, the latest winner of Suzy Amis Cameron’s Red Carpet Green Dress Competition. Growing up in Bordeaux, France, Elia’s growing heart for fashion began to bloom at the early age of 7. Being chosen as the winning designer for the Red Carpet Green Dress Competition, her design was worn by Hollywood actress Olga Kurylenko at the Oscars in March. Le Debut follows Elia as her time at design school is coming to an end, and her debut into the real world of fashion is beginning.

Neff said the MTSU Signature Documentary Program Abroad provides a unique opportunity for film students to travel abroad to gain valuable experience under the direction of faculty and staff.

“These students went to a foreign city, worked with a new artist for only three weeks, produced three documentaries of the highest caliber, comparable to any films coming out of any film school, bar none,” Neff said.

“They faced and overcame obstacles that would be challenging for the most experienced professionals, much less student filmmakers. The films are highly visual, inspiring, and engaging and will be a treat to the audience. We should all support the incredible talent we have in Tennessee.”

Tom Neff, front left, an MTSU associate professor in video and film production, enjoys dinner with students participating in the MTSU Signature Documentary Program Abroad during their travels to Paris in May. The students premiered three documentaries they created based on the trip at a Sept. 30 screening in Nashville. (Submitted photo)