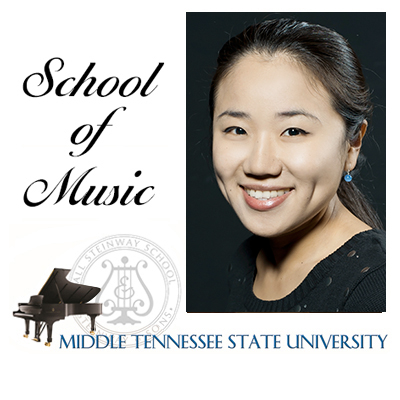 Park’s 8 p.m. public concert will be conducted inside the Wright Building’s Hinton Music Hall. A searchable campus parking map is available at http://tinyurl.com/MTSUParkingMap.

Park, winner of both the 2013 Jose Roca and Russian International Piano Competitions, among many such contests, has performed as a soloist with orchestras and in recitals across the United States, Europe and Asia.

She took her first piano lessons at age 4 and earned undergraduate and graduate degrees from The Juilliard School, as well as a Master of Musical Arts degree from the Yale School of Music. Park currently is an assistant professor of piano at East Tennessee State University and the director of ETSU’s Pre-College Program.

“Dr. Park’s recital will be a great finale to our inaugural season of the MTSU Keyboard Artist Series,” said Dr. Arunesh Nadgir, coordinator of keyboard studies at MTSU.

The recital, titled “Le France,” will feature the works of Baroque-era composer Jean-Philippe Rameau and Impressionist Claude Debussy, both Frenchmen, in the first half and pieces influenced by French culture and composers in the second.

Nadgir explained that despite almost 200 years separating the Rameau and Debussy works, “the two composers strongly connected through the French keyboard tradition. The listener will certainly hear similarities between these works.

“The second half offers wonderful music from the Baroque, Classical and Romantic periods. The audience will certainly appreciate the elegance of the Bach, the lightness and innocence of the Mozart and, finally, the virtuosic fireworks of the Liszt,” he continued.