New grad is writing her own ticket for multimedia ...

New grad is writing her own ticket for multimedia success 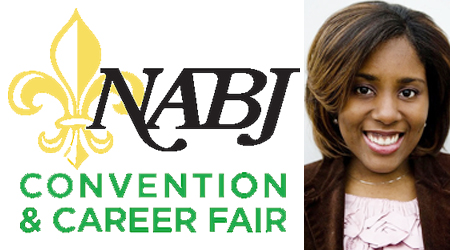 If there’s a script for success in broadcasting, Fadia Patterson is writing—and rewriting it—every day.

The newly minted master’s graduate from MTSU has barely had time to finish writing thank-you notes before packing up for New Orleans and the National Association of Black Journalists’ 37th Annual Conference and Career Fair next month.

She’s one of only 30 students, chosen from thousands across the country, who’ll attend the conference’s NABJ Student Multimedia Project June 18-22. For five days, those students will work alongside professional journalists and educators to produce breaking news and long-form multimedia stories on the convention as well as their host city.

The students’ work will be included in the convention newsletter, the NABJ Monitor, as well as NABJ TV, NABJ Radio and www.nabjconvention.org, the daily news website.

“I am truly excited about this opportunity!” said Patterson, a native of Freeport, N.Y., and West Palm Beach, Fla. “I get to go to New Orleans and work alongside some of the best in the media industry. Some of the journalists that I admire, such as Mara Schiavocampo and Soledad O’Brien, came through this same program.

“I definitely plan to take the industry by storm after graduating with my master’s degree!”

Patterson’s enthusiasm isn’t an idle threat. Less than two weeks after commencement, she landed a job as a videojournalist with Murfreesboro’s CityTV, where she’ll also host the news-magazine show “In the City.”

Of course, she’s already experienced in the field, with internships at WKRN News and the Tennessee Titans Radio Network as well as a stint as a community-affairs producer/reporter for the CW Network in West Palm Beach.

Her news stories at MT-10, MTSU’s student TV station, helped her land the hosting spot for the network’s Koure TV news magazine, which recently won a 2012 College Television Award from the Academy of Arts and Science Foundation.

“I worked with an exceptional team of professionals at Koure TV,” Patterson said, “and I’m grateful that the Academy recognized the show and especially our executive producer, Erica Doyle!”

Patterson, who earned her undergraduate degree in international business at Florida State University, is scripting her next step in the industry. She’s already formed a multimedia company, Fadpat Media Inc., to serve potential business clients, and her multilingual background as the daughter of Haitian immigrants is serving her well.

“I speak French and Creole at home,” she noted, “so I am most excited to be able to show my skills as a multimedia journalist for NABJ but to also experience the Creole culture and people who are descendants of Haitians who migrated to the United States many years ago.”

She noted that her family’s support has been crucial to her journey, “especially my mother, Flore St. Louis, and husband-to-be, Francis Sirleaf Jr. I would also like to mention the late Dr. Thomas Berg. He was a wonderful (electronic media communication) teacher at MTSU who always had an encouraging word for me, and he is truly missed.

“I’m proud to continue my work as a journalist here in Murfreesboro, and I look forward to remaining active with NABJ and Zeta Phi Beta Sorority Inc. The one thing that I would want others to take from my story is to never allow others to dictate your future. Your dreams can be your reality!”